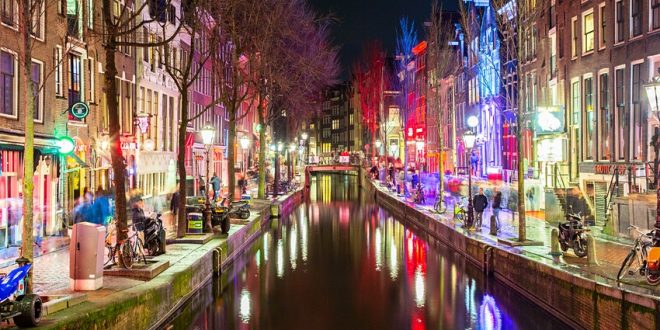 Amsterdam is to ban tourists from buying cannabis in coffee shops

Amsterdam has a lot to offer visitors, from handsome architecture and fantastic restaurants to a bustling cultural scene made up of art galleries and museums. There’s also the more notorious side to the city, where travellers looking to imbibe in life’s sensory pleasures have traditionally been able to do so easily.

In addition to the news that tourists will no longer be able to take tours of the famous red light district, officials are now doubling down on proposals to ban non-residents from buying cannabis at coffee shops.

With a population of approximately 850,000 people, Amsterdam has struggled in recent times with the throngs of tourists that make their way there every year. In 2018 alone, 19 million people visited the city. And it appears that the lure of the coffee shops is a major factor in their decision to come.

Last year, Mayor Femke Halsema commissioned a survey of visitors which included questions on their relationship to coffee shops. The survery revealed that 57% of foreigners visiting the center of Amsterdam say that visiting a coffee shop is a “very important reason” for their visit. When asked about whether or not they would return if they were unable to access coffee shops, 34% of tourists from overseas said that they were unsure, while 11% said that they would not.

“Amsterdam is an international city and we wish to attract tourists, but we would like them to come for its richness, its beauty and its cultural institutions,” Ms Halsema told the council. “The problem is: there are just too many of them.”

With that in mind, and with overtourism a very real issue, especially in the areas of De Wallen and Singel, where red light windows and coffee shops are prevalent, the research results have spurred questions about restricting tourist access to coffee shops as a way to reduce numbers. The proposals are also part of a wider plan to tackle organized crime in the city center.

In a letter to the council on January 8, Mayor Halsema proposed introducing the “resident criterion” which allows only locals to use coffee shops thus reducing the attraction of cannabis to tourists and making tourism in the city easier to manage. In 2020, tourist taxes were raised and tougher sanctions were imposed on renting out Airbnbs to combat overtourism in Amsterdam.

The new cannabis measures are expected to come into effect next year. All non-essential shops, including coffee shops, are currently closed in the Netherlands under COVID-19 restrictions. While it is legal for coffee shops to sell cannabis, the production of the drug is illegal in the Netherlands.