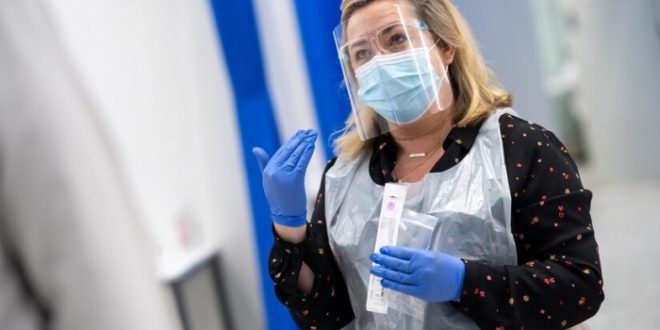 Travellers arriving in England from Covid-19 hotspots from around the world will have to quarantine in hotels, prime minister, Boris Johnson, has announced.

The measures will apply to people coming from most of South America, southern Africa and Portugal, amid concern over new variants of the virus.

Most overseas visitors from those countries are already barred from entering the UK, meaning the new measures will largely impact on British travellers.

However, the opposition Labour party has called for mandatory hotel quarantine for all arrivals.

British nationals and those with residency rights who arrive from high-risk countries will be required to quarantine in a hotel at their own expense for up ten days, in a bid to improve compliance with self-isolation rules.

Speaking during Prime Minister’s Question Time earlier, Johnson told the House of Commons that all travel from 22 countries with a risk of known new variants had already been banned.

In order to further reduce the risk of variants entering the country, he announced that all such arrivals who cannot be refused entry will be required to isolate in government provided accommodation, such as hotels, for ten days “without exception”.

These arrivals will be met at the airport and “transported directly into quarantine”, with the department of health and social care working to set up these facilities.

The home secretary, Priti Patel, added that people wishing to travel out of the UK will first be required to declare their reason for travel.

Speaking earlier, she said travellers would have to prove their journey complied with stay-at-home regulations, which would be checked by carriers.

See also  Vaccinated travelers won’t have to quarantine in Romania

Patel said there would be an increased police presence at airports and ports, and fines for those breaching rules.

Tourism industry bodies have warned against the severe financial impact of the new measures.

The Board of Airline Representatives in the UK (BAR UK) cautioned today that the government must not only add border restrictions but also turn its attention to planning a pathway towards safely re-opening international travel.

BAR UK chief executive, Dale Keller, said: “An expensive 10 day stay in a hotel not of your own choice is distressing and we support that the government has specifically targeted this extreme measure to eligible returning passengers from the 22 travel ban countries.

“The aviation sector is struggling with the depth and duration of this crisis and we can only hope that we have now reached rock bottom.

“Coming out of this crisis the government should have the benefit of improved science and hindsight, so right now is the time to support the sector and to effectively plan a strategic pathway towards the safe re-opening of international travel in conjunction with the industry.”

Julia Lo Bue-Said, chief executive of the Advantage Travel Partnership, argued while the measures were right, the price would be high.

She said: “Of course we accept tighter border controls if that is what is necessary to keep the country safe and recover from the pandemic.

“What we do not accept are ill thought through statements from ministers over the past few days telling the British public not to even think about booking future travel plans particularly when there are many extremely flexible booking options.

“Why do members of the government feel it is their place to further crush confidence?

“What the government continually fails to acknowledge is the number of jobs sustained by the outbound travel industry and that being an Island nation travel is not just for a holiday.

“After nearly a year of disruption, and international travel effectively shut down our members represent hundreds of business owners across the UK under immense financial pressure with over 50 per cent been unable to benefit from government grants due to not being in a designated ‘closed’ retail environment.”