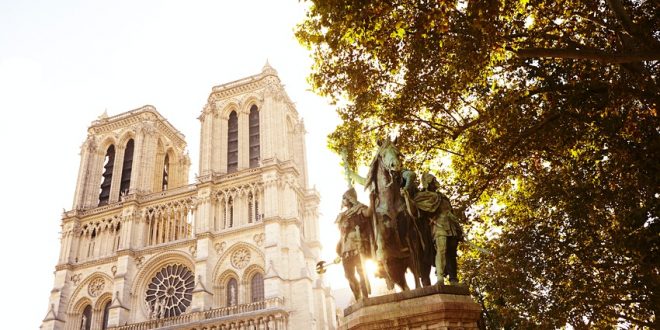 Recently, the iconic Cathédrale Notre Dame de Paris reached a milestone in its renovation, after 200 tons of scaffolding was removed from the damaged landmark following the fire in April 2019. The subject of a new PBS science series, NOVA, a one-hour special called Saving Notre Dame was unveiled recently, exploring the deep history of the site, as well as the herculean task of renovating it.

In celebration of that, here are five amazing facts that you may not know about Notre Dame Cathedral’s ongoing work.

The workers on site wear a uniform consisting of full protective gear, and after they are finished they strip and shower down each time they leave the structure. It’s not because of COVID-19 however – although work has been slowed down significantly as a result of the virus – but it is in fact due to the toxic lead dust that was spread across the site as a result of the fire. The fire melted a reported 440 tonnes of lead inside the 850-year old roof, leading to the spread of toxic debris. Clean-up was halted while air quality and toxic dust was dealt with.

The documentary Saving Notre Dame features Claudine Loisel, a glass scientist tasked with restoring the celebrated stained glass the cathedral is famed for. While the glass masterpieces remain intact following the fire, they were subject to ‘thermal shock,’ forming micro-cracks in some panels. They were also showered with toxic dust, which called for a decontamination plan that involved a precision vacuum cleaner, followed by painstaking application of distilled water using simple cotton balls to remove any residue. To guide them, the team invented a novel use of x-ray spectroscopy to determine the exact number of gentle wipes required to lift the lead off the glass, without damaging paint.

3. 550 tonnes of mangled, unstable scaffolding has towered precariously over the restoration site.

Approximately 550 tonnes of scaffolding has been on location at the site, with the metal structures being in place prior to the fire for use in scheduled restoration work. The extreme heat caused the scaffolding to melt, twist and fuse with the building, causing major issues for the renovation team. While recent reports say that 200 tonnes has been removed, the team has had to battle unstable conditions and even abandon the site when winds have become too strong.

4. Geologists traveled deep into caves beneath Paris to find limestone that matches the limestone in the original vaulted ceiling.

While there was talk in the early days of updates to the plans of Notre Dame Cathedral, including a rooftop garden and a modern spire, it was subsequently announced that the landmark would be reinstated to how it had looked before the fire. In order to get the elements correct, the restoration team have spared no effort in locating the correct materials. In order to stabilize and restore the vault, experts must identify limestone with identical properties as the centuries-old blocks already intricately locked in place. Geologist Lise Leroux studied the stone to find its origin, leading her to quarries beneath Paris, now commonly known as the Catacombs, where she has been able to match micro-fossils found there with the samples from the vaulting stones in the cathedral. This discovery allows the team to properly source the limestone that will fill the holes in the cathedral ceiling.

5. A 3D digital twin of the cathedral is being made to unlock the unknown history of Notre Dame and provide a key for the restoration project.

The renovation of the cathedral has seen the team using innovative technologies, including a 3D digital map of the structure. No original plans survive, but by a stroke of luck, Rémi Fromont had already created a 3D scan of the complex roofing structure in 2014, which promises now to provide the data they will need to bring it back exactly as it was before. There is also a system in place to create a 3D digital twin of the cathedral to protect against risks in the future.

More information on Saving Notre Dame is available at the official NOVA website.