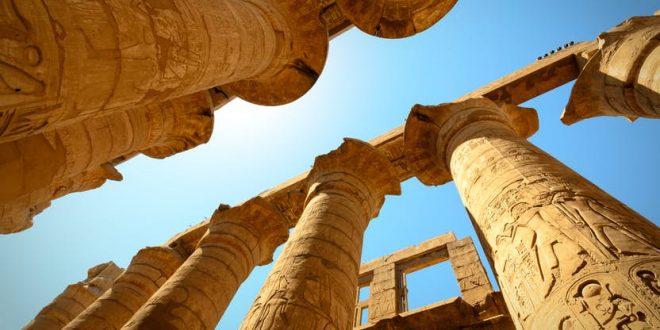 Amun-Ra was the local god of Karnak (Luxor) and during the New Kingdom, when the princes of Thebes ruled Egypt, he became the preeminent state god, with a temple that reflected his status. At the height of its power, the temple owned 421,000 head of cattle, 65 cities, 83 ships and 276,400 hectares of agricultural land and had 81,000 people working for it. The shell that remains, sacked by Assyrians and Persians, is still one of the world’s great archaeological sites, grand, beautiful and inspiring.

The Quay of Amun was the dock where the large boats carrying the statues of the gods moored during festivals. From paintings in the tomb of Nakht and elsewhere we know that there were palaces to the north of the quay and that these were surrounded by lush gardens. On the east side, a ramp slopes down to the processional avenue of ram-headed sphinxes. These lead to the massive unfinished first pylon, the last to be built, during the reign of Nectanebo I (30th dynasty). The inner side of the pylon still has the massive mud-brick construction ramp, up which blocks of stone for the pylon were dragged with rollers and ropes. Napoleon’s expedition recorded blocks still on the ramp.

Behind the first pylon lies the Great Court, the largest area of the Karnak complex. To the left is the Shrine of Seti II, with three small chapels that held the sacred barques (boats) of Mut, Amun and Khonsu during the lead-up to the Opet Festival. In the southeastern corner (far right) is the well-preserved Temple of Ramses III, a miniature version of the pharaoh’s temple at Medinat Habu. The temple plan is simple and classic: pylon, open court, vestibule with four Osirid columns and four columns, hypostyle hall with eight columns and three barque chapels for Amun, Mut and Khonsu. At the centre of the court is a 21m column with a papyrus-shaped capital – the only survivor of ten columns that originally stood here – and a small alabaster altar, all that remains of the Kiosk of Taharka, the 25th-dynasty Nubian pharaoh.

The second pylon was begun by Horemheb, the last 18th-dynasty pharaoh, and continued by Ramses I and Ramses II, who also raised three colossal red-granite statues of himself on either side of the entrance; one is now destroyed.

Beyond the second pylon is the extraordinary Great Hypostyle Hall, one of the greatest religious monuments ever built. Covering 5500 sq m – enough space to contain both Rome’s St Peter’s Basilica and London’s St Paul’s Cathedral – the hall is an unforgettable forest of 134 towering stone pillars. Their papyrus shape symbolise a swamp, of which there were so many along the Nile. Ancient Egyptians believed that these plants surrounded the primeval mound on which life was first created. Each summer when the Nile began to flood, this hall and its columns would fill with several feet of water. Originally, the columns would have been brightly painted – some colour remains – and roofed, making it pretty dark away from the lit main axis. The size and grandeur of the pillars and the endless decorations can be overwhelming, so take your time, sit for a while and stare at the dizzying spectacle.

The hall was planned by Ramses I and built by Seti I and Ramses II. Note the difference in quality between the delicate raised relief in the northern part, by Seti I, and the much cruder sunken relief work, added by Ramses II in the southern part of the hall. The cryptic scenes on the inner walls were intended for the priesthood and the royalty who understood the religious context, but the outer walls are easier to comprehend, showing the pharaoh’s military prowess and strength, and his ability to bring order to chaos.

On the back of the third pylon, built by Amenhotep III, to the right the pharaoh is shown sailing the sacred barque during the Opet Festival. Tuthmosis I (1504–1492 BC) created a narrow court between the third and fourth pylons, where four obelisks stood, two each for Tuthmosis I and Tuthmosis III (1479–1425 BC). Only the bases remain except for one, 22m high, raised for Tuthmosis I.

Beyond the fourth pylon is the Hypostyle Hall of Tuthmosis III built by Tuthmosis I in precious wood, and altered by Tuthmosis III with 14 columns and a stone roof. In this court stands one of the two magnificent 30m-high obelisks erected by Queen Hatshepsut (1473–1458 BC) to the glory of her ‘father’ Amun. The other is broken, but the upper shaft lies near the sacred lake. The Obelisk of Hatshepsut is the tallest in Egypt, its tip originally covered in electrum (a commonly used alloy of gold and silver). After Hatshepsut’s death, her stepson Tuthmosis III eradicated all signs of her reign and had them walled into a sandstone structure.

The ruined fifth pylon, constructed by Tuthmosis I, leads to another colonnade now badly ruined, followed by the small sixth pylon, raised by Tuthmosis III, who also built the pair of red-granite columns in the vestibule beyond, carved with the lotus and the papyrus, the symbols of Upper and Lower Egypt. Nearby, on the left, are two huge statues of Amun and the goddess Amunet, carved in the reign of Tutankhamun.

The original Sanctuary of Amun, the very core of the temple and the place of darkness where the god resided, was built by Tuthmosis III. Destroyed when the temple was sacked by the Persians, it was rebuilt in granite by Alexander the Great’s successor and half-brother, the fragile, dim-witted Philip Arrhidaeus (323–317 BC).

East of the shrine of Philip Arrhidaeus is the oldest-known part of the temple, the Middle Kingdom Court, where Sesostris I built a shrine, of which the foundation walls have been found. On the northern wall of the court is the Wall of Records, a running tally of the organised tribute the pharaoh exacted in honour of Amun from his subjugated lands.

At the back of the Middle Kingdom Court is the Great Festival Hall of Tuthmosis III. It is an unusual structure with carved stone columns imitating tent poles, perhaps a reference to the pharaoh’s life under canvas on his frequent military expeditions abroad. The columned vestibule that lies beyond, generally referred to as the Botanical Gardens, has wonderful, detailed relief scenes of the flora and fauna that the pharaoh had encountered during his campaigns in Syria and Palestine, and had brought back to Egypt.

The courtyard between the Hypostyle Hall and the seventh pylon, built by Tuthmosis III, is known as the cachette court, as thousands of stone and bronze statues were discovered here in 1903. The priests had the old statues and temple furniture they no longer needed buried around 300 BC. Most statues were sent to the Egyptian Museum in Cairo, but some remain, standing in front of the seventh pylon, including four of Tuthmosis III on the left.

The well-preserved eighth pylon, built by Queen Hatshepsut, is the oldest part of the north–south axis of the temple, and one of the earliest pylons in Karnak. Carved on it is a text she falsely attributed to Tuthmosis I, justifying her taking the throne of Egypt.

East of the seventh and eighth pylons is the sacred lake, where, according to Herodotus, the priests of Amun bathed twice daily and nightly for ritual purity. On the northwestern side of the lake is part of the Fallen Obelisk of Hatshepsut showing her coronation, and a giant scarab in stone dedicated by Amenhotep III to Khepri, a form of the sun god.

In the southwestern corner of the enclosure is the Temple of Khonsu, god of the moon, and son of Amun and Mut. It can be reached from a door in the southern wall of the Hypostyle Hall of the Temple of Amun, via a path through various blocks of stone. The temple, mostly the work of Ramses III and enlarged by later Ramesside rulers, lies north of Euergetes’ Gate and the avenue of sphinxes leading to Luxor Temple. The temple pylon leads via a peristyle court to a hypostyle hall with eight columns carved with figures of Ramses XI and the High Priest Herihor, who effectively ruled Upper Egypt at the time. The next chamber housed the sacred barque of Khonsu.

Previous Kenya: Where the wind blows
Next Algeria: Timgad 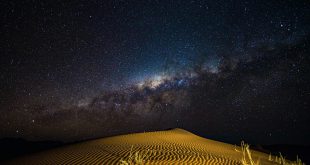 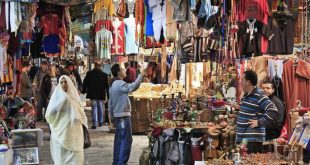 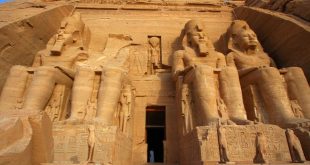