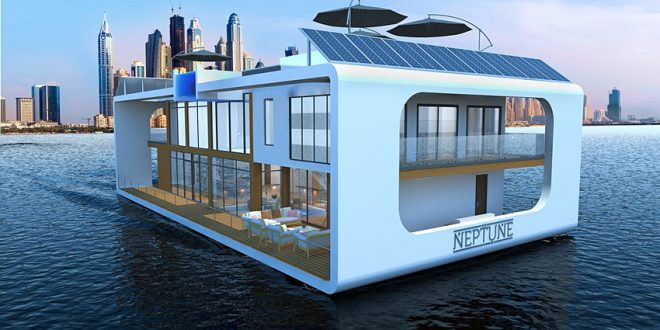 Dubai knows a thing or two about over-the-top hotels – it’s home to the two tallest hotels in the world as well as the self-styled seven-star Burj Al Arab. But now plans for a new floating resort near Dubai Marina have been unveiled, and it could be the next iconic accommodation option in the city.

The floating resort, called the Sea Palace, is being constructed by Seagate Shipyard, an Emirati ship-building company. The resort will consist of a luxury hotel surrounded by six floating houses, which can detach and set sail on their own. The architecture was inspired by glass-bottom boats, and the houses will have see-through floors and furniture designed by Aston Martin. The houses are operated by automatic smart systems and include self-sterilising air filters, solar energy panels and garbage recycling systems.

“I believe this type of project will create a boom in the tourism field”, said Mohammed El Bhawravi, the founder of Seagate Shipyard and project owner. The company says that the project is about 65% complete and that the houses are currently in the last stages of construction.

Dubai reopened to travelers in July, and visitors are required to get a PCR test for COVID-19 within 96 hours of their flight’s departure. The emirate also announced new visas for digital nomads and remote workers that don’t require an Emirati sponsor but give visitors access to benefits, such as opening a bank account and enrolling children in local schools, that were previously only afforded to residents.