Breaking News
Home / Asia / The Gili Islands offer something for everyone, which one is right for you? 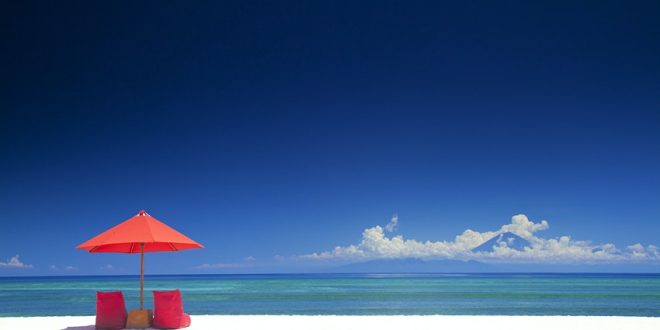 The Gili Islands offer something for everyone, which one is right for you?

Fringed by white-sand beaches and coconut palms, the Gili Islands, located off the northwest coast of Lombok, are a vision of paradise. Looking for a holiday paradise? Or maybe you’re desperate to get away from the crowds? Each island has a distinct personality. Find the one that matches yours.

The largest, liveliest and most developed of the three Gili Islands, Gili Trawangan is also one of the world’s cheapest and safest places to learn to dive, with plenty of reputable dive schools to choose from. You can walk the sandy circumference of the island in around two hours (or run it in just under an hour).

Gili T has a very friendly vibe and is full of people keen to get to know one another. The social atmosphere is a massive draw – each night of the week, a different club or dive centre bar hosts a party, so everyone ends up in the same place (and business is spread evenly across the venues).

You can, however, still enjoy spending time on Gili T if you’re not into partying – the scuba trips, free-diving classes and sunbathing spots are more than enough to keep most people here, and the party atmosphere isn’t too overbearing for open-minded families, particularly the further away you travel from the public boat landing. Snorkellers should head to the northern part of the island for the best marine life, including turtles. 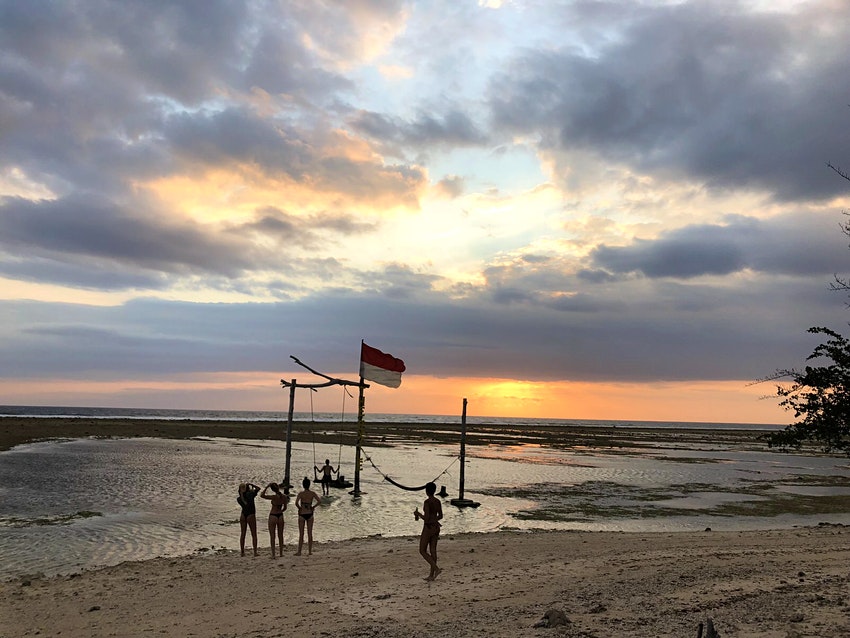 There’s a great variety of accommodation on Gili T, with some quality hostels, bungalows and homestays on the main strip on the eastern side of the island (join the pool party at Gili Beach Bum Hotel or chill out in style at Gili Joglo), and a vast choice of international restaurants to suit all tastes, budgets and dietary needs. Cars are forbidden on all three Gilis, but Gili T’s main strip (which was severely damaged in the 2018 earthquakes) can become surprisingly congested with foot traffic, bicycles and horse-drawn carts.

The western side of the island is much quieter and is mostly occupied by serene high-end resorts (splurge on the stylish bungalows at Gili Teak Resort or one of the five stilted wooden villas at Gili Treehouses). The southwestern point offers sensational sunsets, which serve as the backdrop for the epic happy hours at beach bars like The Exile and Casa Vintage.

Might be for you if: you’re travelling alone and looking to mingle while you log a few dives, or if you’re with friends and keen for a few memorable nights out
Might not be for you if: the hedonistic backpacker party scene isn’t your thing. 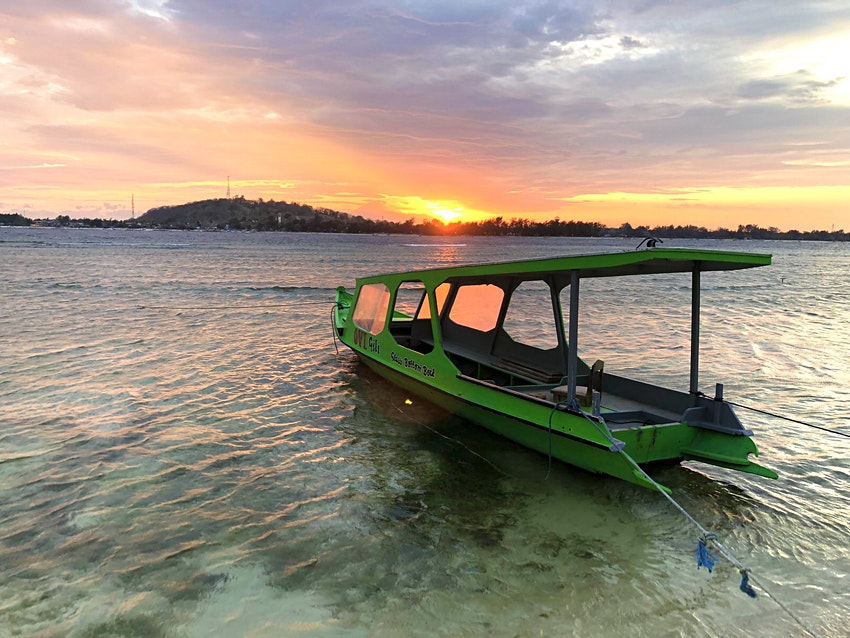 The smallest and quietest of the three Gilis, Gili Meno arguably has the best beaches of the lot – swathes of white sand scattered with squat trees, fringed with crystal clear water. There’s a definite honeymoon atmosphere that you can sense as soon as you step off the boat and see couples canoodling on the beach, and thatched-roof huts for two lining the shoreline beyond them.

There are just a handful of restaurants to choose from on Meno, and most serve Indonesian fare (head to Sasak Cafe at sunset for crispy fish and other yummy Sasak dishes). The 2018 earthquakes toppled many hotels here.

The remaining options tend to skew upmarket, though there are two fantastically eccentric hostels: The Rabbit Tree (home to a dorm room in a ball pit) and Gili Meno Eco Hostel (a driftwood jungle gym for adults). Other than a few secluded resorts (such as Mahamaya), the western side of the island is largely deserted.

There are several dive schools to choose from on the island and some spectacular sites just offshore. These include the Bounty – a sunken pier, which is really fun to explore – and Meno Wall, a top pick for macro lovers. Selfie-taking snorkellers put on waterproof phone cases and head out to Nest, an underwater sculpture from British artist Jason deCaires Taylor with 48 life-sized human figures.

Locals hiring out snorkelling gear and bicycles can be found on the main strip on the island’s east coast – just be sure to check that the equipment is in good condition before you walk away with it. Gili M is mainly about rest and relaxation, so if you get bored easily, it may be best to limit your visit to one day. 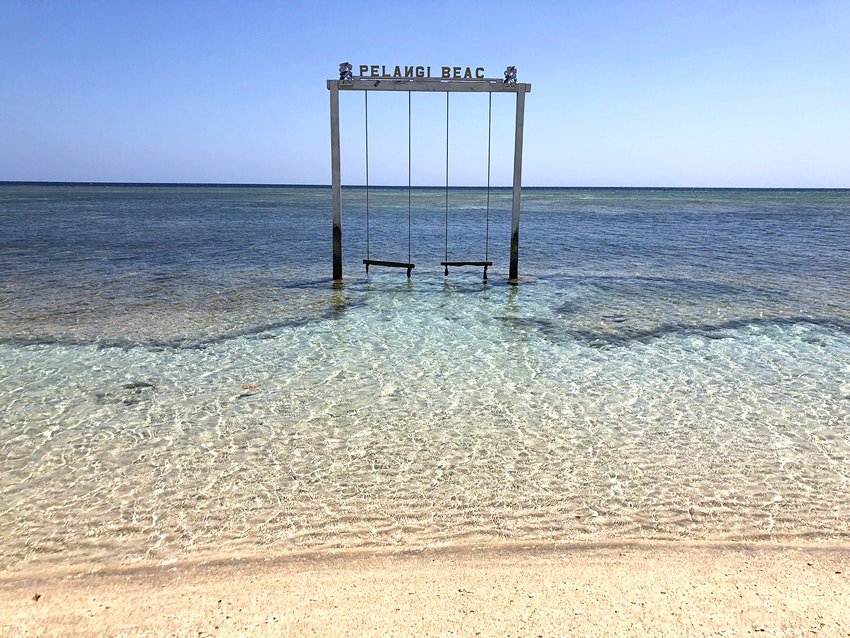 Gili Air is the perfect blend of the other two Gilis. While it has similar facilities as Gili T – with a few of the same restaurant and diving school franchises – it’s almost as peaceful as Gili M. There is a slight hippy feel to the island – think guitar strumming and Bob Marley tunes – and it’s creeping up on Ubud for the title of Indonesia’s top yoga destination. Air is also the only Gili where you can gaze across the sea for uninterrupted views of Lombok’s mountainous northern coast.

The northern and southern sides of the island are lined with plenty of beach bars and restaurants. In terms of nightlife, there’s more of laid-back, chill-out-over-a-Bintang-style bar culture, and though there are places you can go dancing, clubbing is not a priority for Gili Air-goers. Having said that, full moon parties do take place here each month. 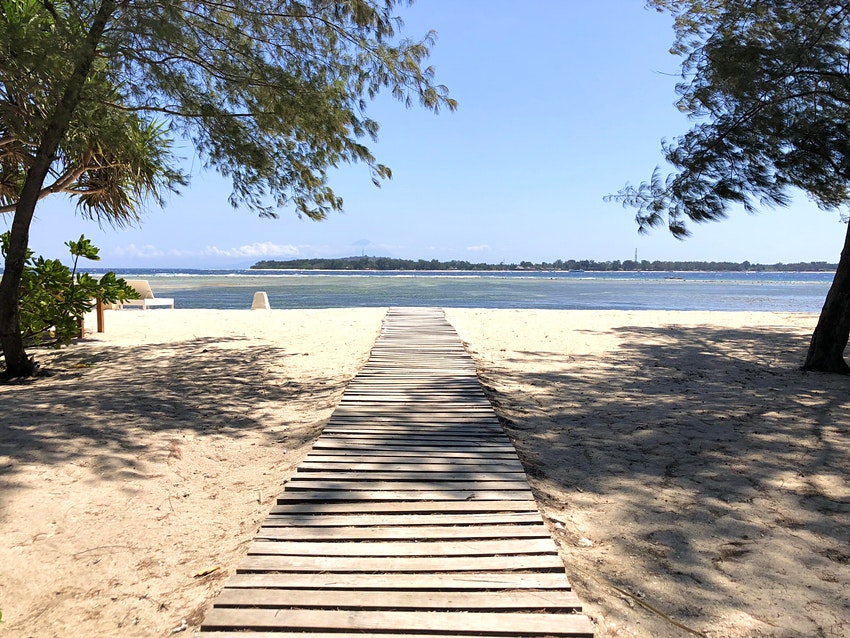 There are a couple of dive centres on Gili Air, and lots of places to hire bikes (warning: it can be hard-going on the sandy roads) and snorkelling gear. The coral reef off the east coast provides great snorkelling opportunities – just like the other Gilis, you’re bound to see a clownfish or two, and there’s a good chance you’ll spot turtles. On the western side, you’ll find unspoilt white sandy beaches and little else.

Gili Air bounced back from the 2018 earthquakes faster than its neighbours. The current spread of accommodation consists mostly of comfortable bungalows for budget and mid-range travellers (try Sejuk Cottages or Biba Beach Village). 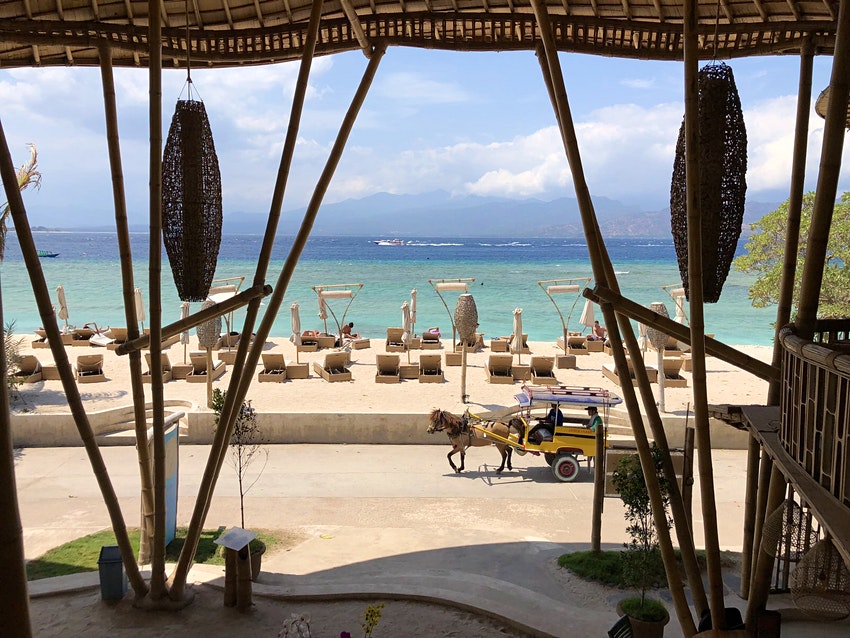 How to get to the Gilis

Fast boats advertise swift connections (45 minutes to 2½ hours, depending on the destination) between Bali and Gili Trawangan. They leave from several departure points in Bali, including Benoa Harbour, Sanur, Padangbai and Amed. Some go via Nusa Lembongan. Many dock at Teluk Nare/Teluk Kade on Lombok north of Senggigi before continuing onto Air and Trawangan (you’ll have to transfer for Meno in most cases).

Gili Bookings presents a range of boat operators and prices in response to your booking request. It’s useful for getting an idea of the services offered, but it is not comprehensive and you may get a better price by buying directly from the operator. Keep in mind that the fast boats are unregulated and operating and safety standards vary widely – there have been some major accidents and boats have sunk.

From Lombok, you can travel on one of the fast boats from Teluk Nare/Teluk Kade north of Senggigi. However, most people use the public boats that leave from Bangsal Harbour. Boat tickets at Bangsal Harbour are sold at the port’s large ticket office, which is where you can also charter a boat. Buy a ticket elsewhere and you’re getting played.

Public boats to the Gilis run most frequently before noon; after that, you shouldn’t wait much more than an hour for boats to Gili T or Gili Air, while special boats depart for Gili Meno later in the day. With the exception of these afternoon transfers to Gili Meno, all boats leave, in both directions, only when full – about 45 people. When no public boat is running to your Gili, you may have to charter a boat. 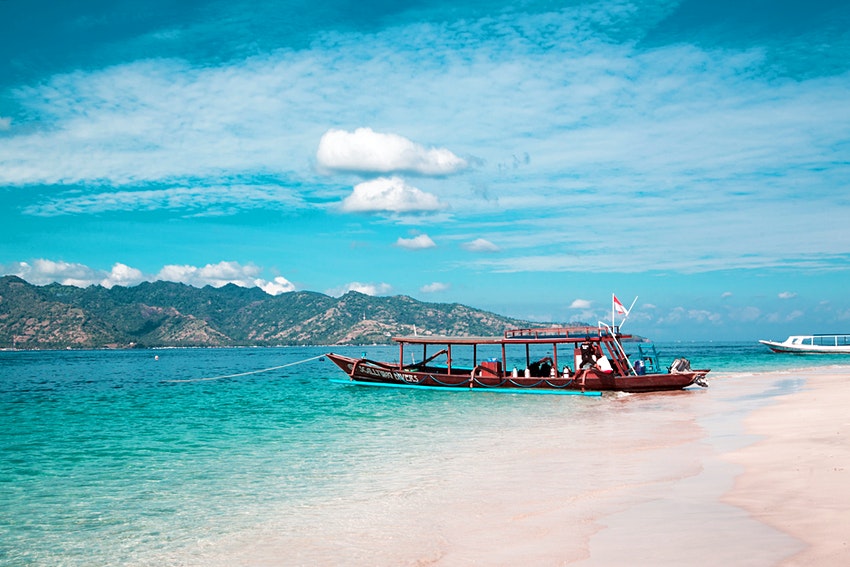 Although it had a bad reputation for years, Bangsal Harbour hassles are much reduced. Still, avoid touts and note that anyone who helps you with bags deserves a tip (10,000Rp per bag is appropriate). There are ATMs. Coming by public transport via Mataram and Senggigi, catch a bus or bemo to Pemenang, from where it’s a 1.2km (0.74mi) walk ( or you can take an ojek) to Bangsal Harbour. A metered taxi to the port will take you to the harbour. 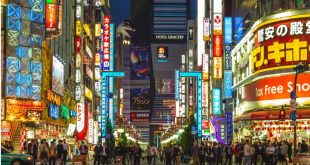