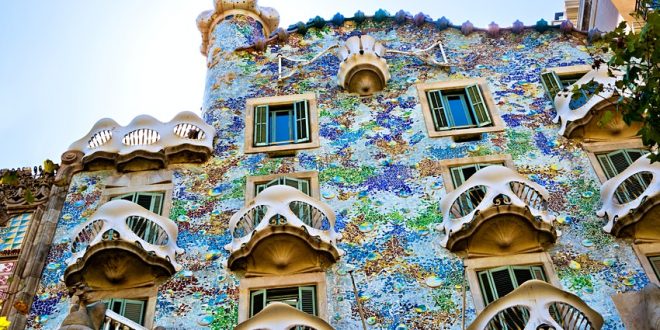 Building first boomed in the late Middle Ages, when Barcelona was seat of the Catalan empire. In the late 19th century, the city broke its medieval confines and was transformed through whimsical architectural movement called Modernisme (Catalan modernism). The third notable era of design began in the late 1980s and continues today.

But Barcelona’s architectural gift to the world was Modernisme, a flamboyant Catalan creation that erupted in the late 19th century. Modernisme was personified by the visionary work of Antoni Gaudí, a giant in the world of architecture. Imaginative creations by Gaudí and his contemporaries have filled Barcelona with dozens of masterpieces.

If you have time for only one sightseeing outing in Barcelona, La Sagrada Família should be it. Gaudí’s unparalleled, Unesco-listed La Sagrada Família inspires awe by its sheer verticality, and in the manner of the medieval cathedrals it emulates, it’s still under construction. Work began in 1882 and is hoped (perhaps optimistically) to be completed in 2026, a century after the architect’s death. Unfinished it may be, but the cathedral attracts more than 4.5 million visitors a year and is the most visited monument in Spain. 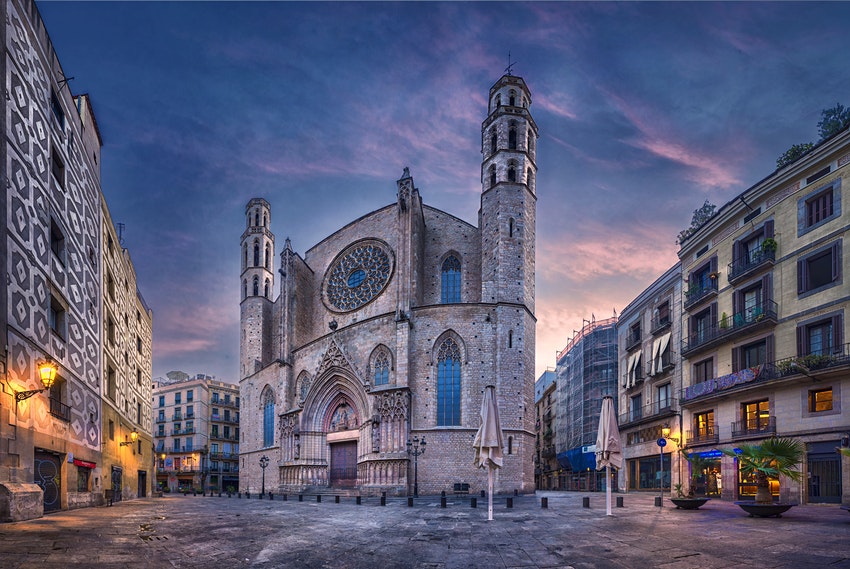 At the southwestern end of Passeig del Born stands Barcelona’s finest Catalan Gothic church, Santa Maria del Mar (Our Lady of the Sea). Begun in 1329, under the watch of architects Berenguer de Montagut and Ramon Despuig, the church is remarkable for its architectural harmony and simplicity. Famously the parishioners themselves gave up their time to help construct the church, particularly the stevedores (longshoremen) from the nearby port.

Barcelona’s famously cucumber-shaped tower, Jean Nouvel’s luminous Torre Glòries is among the most daring additions to the city’s skyline since the first towers of La Sagrada Família went up. Opened in 2005, the 38-story structure shimmers at night in shades of midnight blue and lipstick red. The interior is closed to visitors and has offices.

A symphony in tile, brick, sculpted stone and stained glass, the Unesco-listed, 2146-seat Palau de la Música Catalana concert hall is a high point of Barcelona’s Modernisme architecture. Built between 1905 and 1908 by Domènech i Montaner, with the help of some of the best Catalan artisans of the time, it was conceived as a temple for the Catalan Renaixença (Renaissance). The showstopper is the richly colorful auditorium, with its ceiling of blue-and-gold stained glass and a shimmering skylight. Above a bust of Beethoven on the stage towers a wind-blown sculpture of Wagner’s Valkyries (Wagner was top of the Barcelona charts at the time the building was created), all accompanied by 18 Greek mythological muses. Tilted chandeliers look towards the sun-like skylight, like flowers. 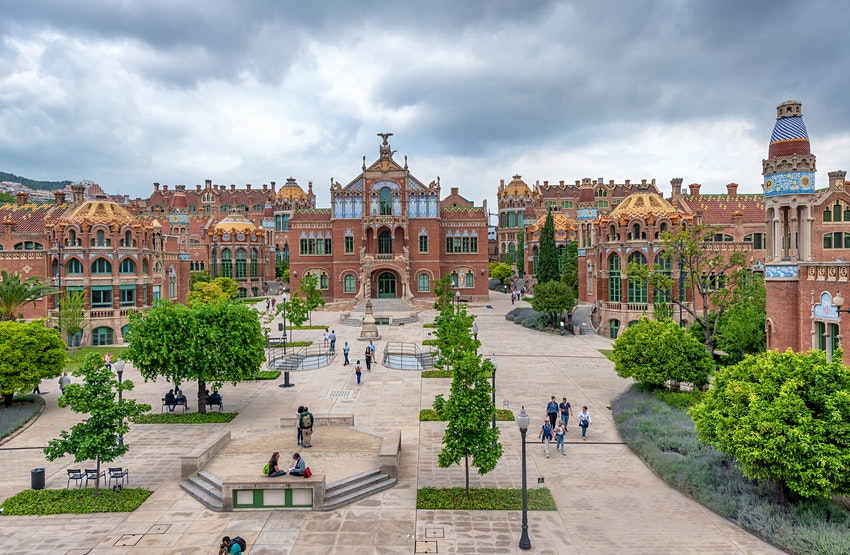 Domènech i Montaner outdid himself as architect and philanthropist with the Modernisme Hospital de la Santa Creu i de Sant Pau, renamed Recinte Modernista in 2014. Built between 1902 and 1930, it was long considered one of Barcelona’s most important hospitals, but was repurposed into cultural centers, offices and a monument in 2009. A joint Unesco World Heritage Site together with the Palau de la Música Catalana, the 27-building complex is lavishly decorated and each of its 16 pavilions unique. 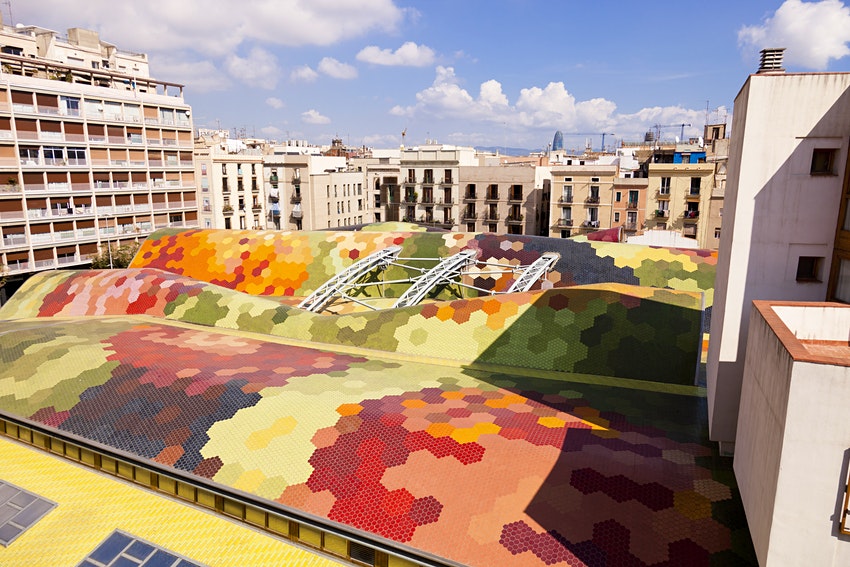 Come shopping for your tomatoes or pop in for lunch at Mercat de Santa Caterina, an extraordinary-looking produce market, designed by forward-thinking architects Enric Miralles and Benedetta Tagliabue to replace its 19th-century predecessor. Completed in 2005 (sadly after Miralles’ death in 2000), it’s distinguished by its undulating, kaleidoscopic roof, suspended above bustling produce stands, restaurants, cafes and bars by twisting slender branches of what look like gray steel trees.

The multicolored ceramic roof (with a ceiling made of warm, light wood) recalls the Modernisme tradition of trencadís decoration (using a type of mosaic made from tile shards). Indeed, its curvy design, like a series of Mediterranean rollers, seems to plunge back into an era when Barcelona’s architects were limited only by their (vivid) imaginations, and bears an uncanny resemblance to that of the Escoles de Gaudí at La Sagrada Família. The brightly colored pattern is in fact from a photo of a fruit and vegetable stall, blown up to huge scale. 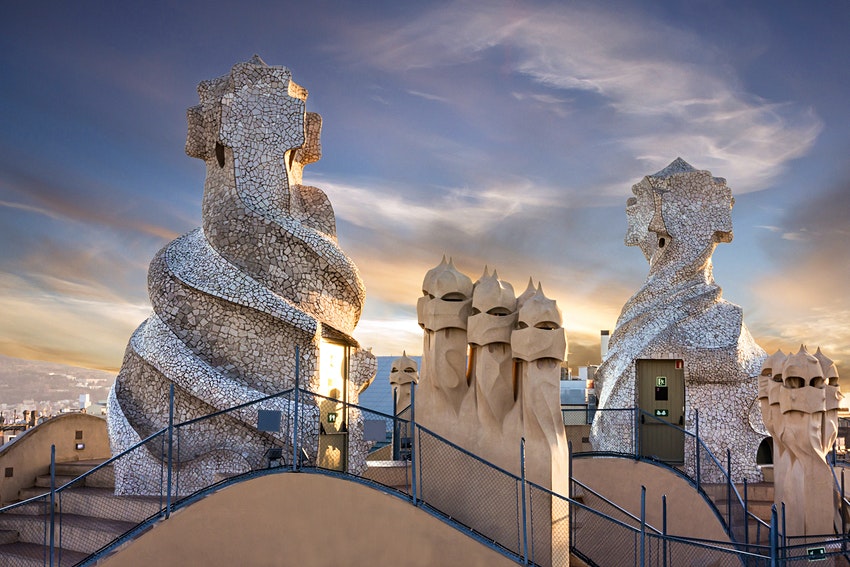 In the top tier of Gaudí’s achievements, the madcap La Pedrera is a Unesco-listed masterpiece. With 33 balconies, it was built in 1905–10 as a combined apartment and office block. Formally called Casa Milà, after the businessman who commissioned it, it is better known as La Pedrera (the Quarry) because of its uneven grey stone facade, which ripples around the corner of Carrer de Provença. Gaudí’s approach to space and light as well as the blurring of the dividing line between decoration and functionality are astounding.

READ  Spain to reopen to holidaymakers from UK On 24 May

The natural world was one of the most enduring influences on Gaudí’s work, and the building’s undulating gray-stone facade evokes a cliff-face sculpted by waves and wind. The wave effect is emphasized by elaborate wrought-iron balconies that bring to mind seaweed washed up on the shore. The lasting impression is of a building on the verge of motion – a living building. 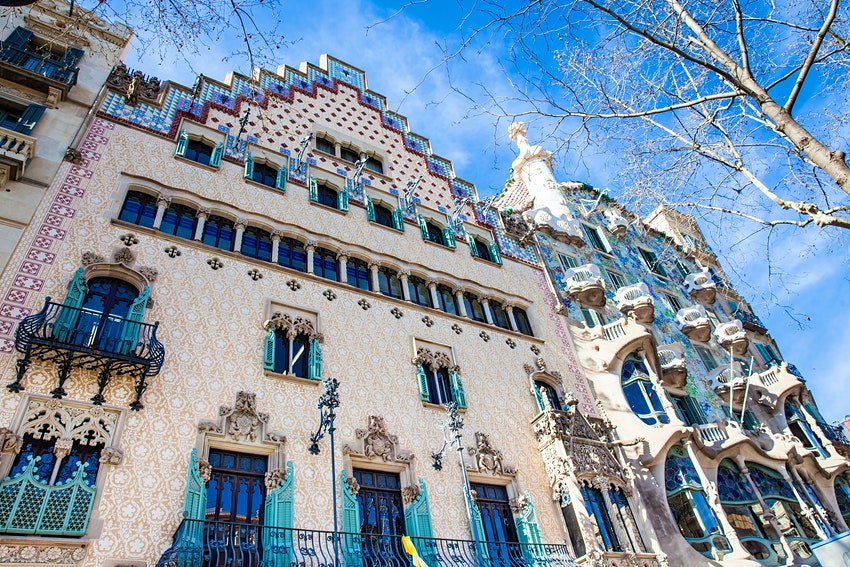 One of Puig i Cadafalch’s most striking flights of Modernisme fantasy, Casa Amatller combines Gothic window frames and Romanesque flourishes with a stepped gable borrowed from Dutch urban architecture. But the busts and reliefs of dragons, knights and other characters dripping off the main facade are pure caprice. The beautifully tiled pillared foyer and staircase lit by stained glass feel like the interior of some romantic castle. The building was renovated in 1900 for chocolate baron and philanthropist Antoni Amatller (1851–1910).

One of Europe’s strangest residential buildings, Casa Batlló (built 1904–6) is Gaudí at his fantastical best. From its playful facade and marine-world inspiration to its revolutionary experiments in light and architectural form (straight lines are few and far between), this apartment block is one of the most beautiful buildings in a city where the architectural stakes soar sky-high.

When Gaudí was commissioned to refashion this building, he went to town inside and out. The internal light wells shimmer with tiles of deep-sea blue. Gaudí eschewed the straight line, and so the staircase wafts you up to the 2nd floor, where the main salon looks on to Passeig de Gràcia. Everything swirls: the ceiling is twisted into a vortex around its sunlike chandelier; the doors, window and skylights are dreamy waves of wood and colored glass. The same themes continue in the other rooms and covered terrace. The attic is characterized by Gaudí trademark hyperboloid arches. Twisting, tiled chimney pots add a surreal touch to the roof, while the back terrace feels like a kaleidoscopic fantasy garden in miniature, with flowerpots taking on strange shapes and more than 300 pieces of trencadís.

Designed in glass, steel and various marbles in 1929 by Ludwig Mies van der Rohe (1886–1969) for the World Exhibition, the curious Pavelló Mies van der Rohe is emblematic of the Modernisme movement and has inspired several generations of architects. It was removed after the show and reconstructed only in the 1980s, after been consistently referred to as one of the key works of modern architecture.

Previous Italian meal to an art form
Next The Best Time to Visit Sydney, Australia

Santorini is the supermodel of the Greek islands, a head-turner whose face is instantly recognizable …