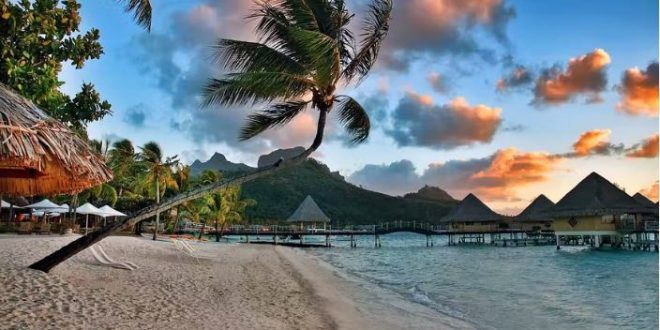 With its turquoise lagoon, blonde beaches and lush mountain backdrop, Bora Bora is the epitome of a tropical paradise. Typically pictured with clear blue, sunny skies or fiery sunsets, this is the luxury island escape that many travelers dream of – and thanks to year-round warm temperatures, there really isn’t a bad time to visit.

From snorkeling with rays and reef sharks to hikes around ancient ceremonial sites, spending time in Bora Bora will captivate any traveler who lands on its shores. However, while the island basks under cloudless blue skies in the photos, remember that this is the South Pacific and the island has a tropical rainy season from December to March.

Don’t let that turn you away too quickly though – visiting during the rainy season has its advantages too! Here’s what you need to know about the best times to visit Bora Bora.

The best time to avoid the crowds and save on resorts

As Bora Bora’s dry season comes to an end, the days start to get cloudier and there’s an increased chance of rain. The temperatures creep up a little higher and the humidity kicks in. This change in the weather marks the low season for tourism in Bora Bora, but this can be advantageous to travelers who don’t mind a little rain on their vacation. Hurricanes (known here as cyclones) are rare but they can blow through at this time of year.

During the rainy season, many of the island’s top resorts drop their rates as demand falls. This makes a luxe stay at an overwater bungalow resort, such as the luxurious Four Seasons Bora Bora, much more affordable. Another advantage to low season in Bora Bora is the lack of crowds; most visitors crave those iconic blue skies, and visitor numbers thin out significantly when the weather is more unpredictable.

The best of both worlds – good weather and moderate prices

The months of April and November fall between the wet and dry seasons, offering some of the advantages of both seasons. During these months, you’ll see fewer crowds and you can find some generous deals from resorts, but the weather still brings plenty of sunshine.

There will be some rain and humidity, though the rain showers tend to pass quite quickly. The shoulder months are also a favorite time for scuba divers as the absence of strong winds makes for calm, clear waters – perfect for spotting sharks, manta rays, barracudas and more out in the deep blue.

High Season: May to October

The best time for blue skies and sunshine

The dry season in Bora Bora takes place over the winter months in the island, but note that this is the southern hemisphere winter (the opposite from the winter months in Europe, Asia and America). The dry months see low levels of rainfall, so you can be confident that you will have clear blue skies with plenty of sunshine for much of your stay. Temperatures during the winter are also a bit cooler than the summer months, with daytime highs around 28°C (83°F).

This ideal weather for basking in the sun makes the dry season the most popular time to visit Bora Bora. Keep in mind this also tends to mean higher prices on resorts and bigger crowds across the island. Finding seats on flights can also be a challenge at peak times. 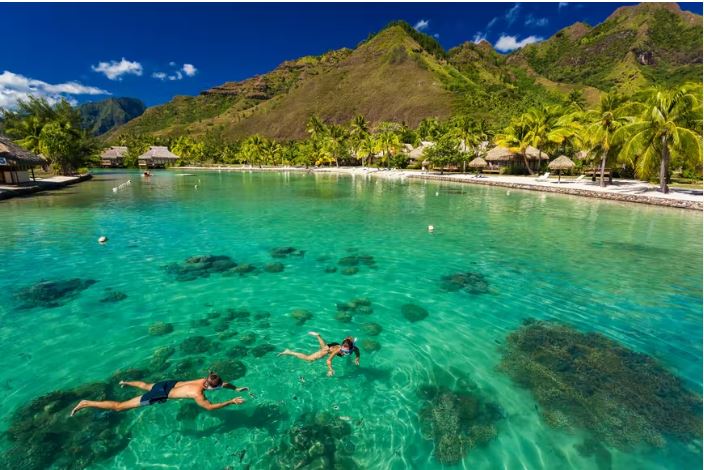 Lots of rain and high levels of humidity characterize the month of January in Bora Bora, making this one of the least popular months for visitors. However, this is one of the best months to nab a deal at one of the island’s luxury resorts. If you are looking to visit Bora Bora on a budget, look around to see what deals are on offer.
Key events: Taurua Varua

February sees less rain than January, though this month has the highest chance of a cyclone. As French Polynesia lies off the main cyclone belt, these are quite rare but the chance is still there (the last major cyclone was in 2010). Humidity is high, which can be uncomfortable during the day, but it also brings some of the most incredible sunsets you’ll ever see. Again, tourism is slow during this month so prices tend to be lower at resorts.
Key events: Special events for Valentine’s Day (14 February)

April is one of the two shoulder-season months. The rains start to ease up and there is more sunshine and less humidity in general. Visibility in the water improves and April sees the kickoff of the main scuba diving season. The official high season hasn’t started yet which means you can still find deals on accommodation and avoid the crowds.
Key events: Easter celebrations (these can fall in March)

May marks the beginning of the high season, with more blue skies but also an increase in resort pricing. The main crowds haven’t arrived yet and water conditions are ideal for scuba diving. The Tahiti Pearl Regatta sailing race draws teams from across the globe.
Key events: Tahiti Pearl Regatta, Victory Day

Come June you’ll notice a drop in temperatures at night and the humidity decreases as well, making this a perfect month to visit. June is also when school holidays start in North America and Europe, bringing vacationing families to many Bora Bora resorts. The wind tends to pick up in June, creating ideal conditions for sailing and kiteboarding, but decreasing the visibility for scuba diving.
Key events: Hivavaeve 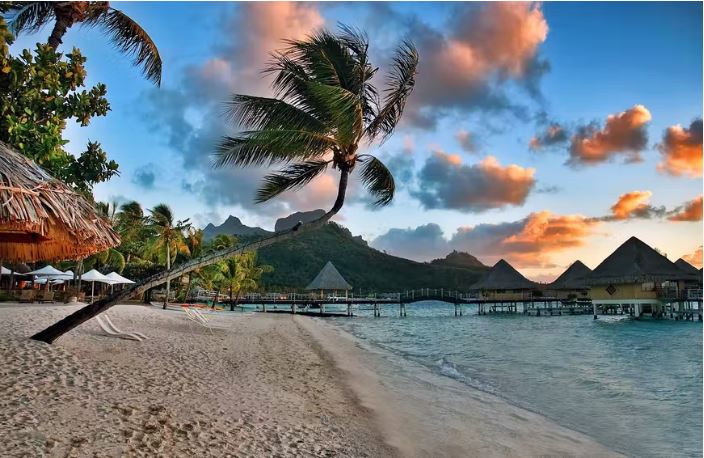 July is the peak of the high season and this is not just down to the good weather conditions. Bora Bora’s biggest cultural festival, Heive I Bora Bora, takes place in July, making this one of the best times to visit the island.
Key events: Heive I Bora Bora, Raid Anei hiking race

Perhaps the busiest month during peak season, this is when most Europeans tend to visit. While it will be crowded and prices will be at their highest, August also brings the best weather, with many hours of sunshine and low humidity. The trade winds still blow making the heat more manageable, which is perfect for exploring the interior of the island as well as taking advantage of beach days.
Key events: Assumption

It’s still high season, but things start to quieten down a bit since it’s back to school for families coming from abroad. September marks the height of humpback whale season in Bora Bora (which runs from mid-July to the end of October). This is the best time to see mothers and their calves in the waters surrounding the island; you can’t swim with them here as you can in Mo’orea, but there are plenty of whale-watching tours.
Key events: Whale migration

October marks the end of the high season. Towards the end of the month, you’ll notice more humidity and rain but, overall, there’s still a lot of sunshine. Local school holidays during this month bring families to the beaches. Scuba divers return in October as the waters tend to be calm, meaning great visibility.
Key events: Stone-throwing competitions

November is one of the two shoulder season months. The humidity is higher and there are more rain showers, but overall, the temperatures are still manageable and you’ll still see some sunshine. Crowds tend to fade away and you’ll notice a decrease in resort pricing. Plus, since the heavy rains haven’t quite started yet, visibility is still great for snorkeling and scuba diving.
Key events: La Toussaint (All Saints’ Day), Hawaiki nui va’a, Armistice Day

December is the most humid time in Bora Bora. It can also be pretty rainy, with long periods of cloudy skies. However, it’s also Christmas time, which sees enthusiastic celebrations across the island. Locals really get into the holiday spirit and tourists are welcome at lots of local events.
Key events: Christmas