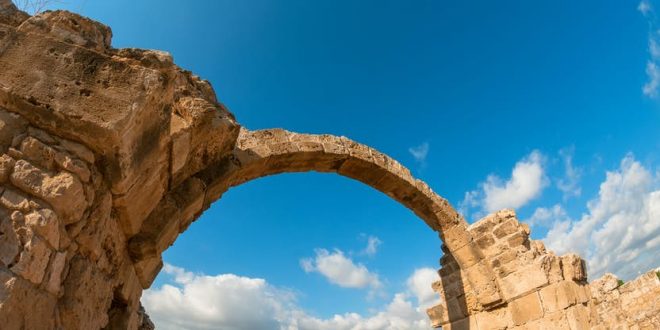 Nea Pafos (New Pafos) is, ironically, the name given to the sprawling Pafos Archaeological Site, to the west of Kato Pafos. Nea Pafos was the ancient city of Pafos, founded in the late 4th century BC and originally encircled by massive walls. Despite being ceded to the Romans in 58 BC, it remained the centre of all political and administrative life in Cyprus. It is most famed today for its mesmerising collection of intricate and colourful mosaics based on ancient Greek myths.

Palea Pafos (Old Pafos) was in fact Kouklia, southeast of today’s Pafos and the site of the Sanctuary of Aphrodite. At the time of Nea Pafos, Cyprus was part of the kingdom of the Ptolemies, the Greco-Macedonian rulers of Egypt whose capital was Alexandria. The city became an important strategic outpost for the Ptolemies, and the settlement grew considerably over the next seven centuries.

The city originally occupied an area of about 950,000 sq metres and reached its zenith during the 2nd or 3rd century AD. It was during this time that the city’s most opulent public buildings were constructed, including those that house the famous Pafos mosaics.

Nea Pafos went into decline following an earthquake in the 4th century that badly damaged the city. Subsequently, Salamis in the east became the new capital of Cyprus, and Nea Pafos was relegated to the status of a mere bishopric. Arab raids in the 7th century set the seal on the city’s demise and neither Lusignan settlement (1192–1489) nor Venetian and Ottoman colonisation revived Nea Pafos’ fortunes.

The archaeological site is still being excavated since it is widely believed that there are many treasures still to be discovered. The following sections detail the major sights.

This superb collection of mosaics is located in the southern sector of the archaeological site, immediately to the south of the Agora. Discovered by accident in 1962 by a farmer ploughing his field, these exquisite mosaics decorated the extensive floor area of a large, wealthy residence from the Roman period. Subsequently named the House of Dionysus (because of the number of mosaics featuring Dionysus, the god of wine), this complex is the largest and best known of the mosaic houses.

The most wonderful thing about the mosaics is that, apart from their artistic and aesthetic merits, each tells a story, mostly based on ancient Greek myths.

The first thing you’ll see upon entering is not a Roman mosaic at all but a Hellenistic monochrome pebble mosaic showing the monster Scylla. Based on a Greek myth, this mosaic was discovered in 1977, a metre underground in the southwestern corner of the atrium.

The famous tale of Narcissus is depicted in a mosaic in Room 2, while the Four Seasons mosaic (Room 3) depicts Spring crowned with flowers and holding a shepherd’s stick; Summer holding a sickle and wearing ears of corn; Autumn crowned with leaves and wheat; and Winter as a bearded, grey-haired man.

Phaedra and Hippolytos (Room 6) is one of the most important mosaics in the house. It depicts the tragic tale of a stepmother’s bizarre love for her stepson.

Another stunning mosaic in the house is the Rape of Ganymede (Room 8). Ganymede was a beautiful young shepherd who became the cupbearer of the gods. The mosaicist had apparently miscalculated the space allowed to him, which is why the eagle’s wings are cropped.

In the Western Portico (Room 16) is a mosaic based on a tale familiar to any lover of Shakespeare: the story of Pyramus and Thisbe, first narrated by Ovid in his Metamorphosis, and adapted in Romeo and Juliet (and A Midsummer Night’s Dream).

A short walk away are the smaller Villa of Theseus and the House of Aion. The latter, a purpose-built structure made from stones found on the site, houses a 4th-century mosaic display made up of five separate panels. The house was named after the pagan god Aion, depicted in the mosaics. Although the image has been damaged somewhat, the name Aion and the face of the god can still be clearly seen.

The Villa of Theseus is thought to have been a 2nd-century private residence and is named after a representation of the hero Theseus fighting the Minotaur. The building occupies an area of 9600 sq metres and, so far, 1400 sq metres of mosaics have been uncovered. The round mosaic of Theseus and the Minotaur is particularly well preserved and can be seen in Room 36. Other mosaics to look out for are those of Poseidon in Room 76 and Achilles in Rooms 39 and 40.

Not far from the mosaics are the remains of the medieval Saranta Kolones Fortress, named for the ‘40 columns’ that were once a feature of the now almost levelled structure. Little is known about the precise nature or history of the original fortress, other than it was built by the Lusignans in the 12th century and was subsequently destroyed by an earthquake in 1222. A few desultory arches are the only visual evidence of its original grandeur.

The Agora (or forum) and Asklipieion date back to the 2nd century AD. Today, the Agora consists mainly of the Odeion, a semicircular theatre restored in 1970 and not appearing particularly ancient. The rest of the Agora is discernible by the remains of marble columns that form a rectangle in the largely empty open space. What is left of the Asklipieion, the healing centre and altar of Asklepios, god of medicine, runs east to west on the southern side of the Odeion.

Be sure to stop by the Visitors’ Centre at the top of the steps near the entrance. Interesting rotating exhibitions take place here and you can pick up a guidebook (€5.50), which explains the site in detail.