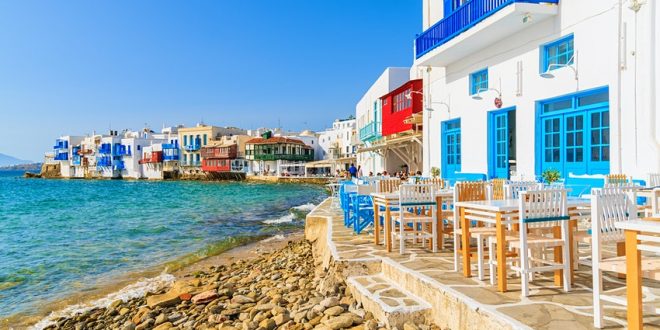 It’s fair to say Greece ticks a lot of boxes as a travel destination. Fascinating ancient monuments. Big tick. Hiking trails galore. Tick. Traditional hilltop towns and charming fishing villages. Tick and tick. And then there are the stunning beaches, buzzing cities, and amazing national cuisine to consider. In reality, you could spend months exploring everything on offer, but if you’re planning on undertaking a whirlwind tour, these 12 sites make for essential stops. Here are the best places to visit in Greece. 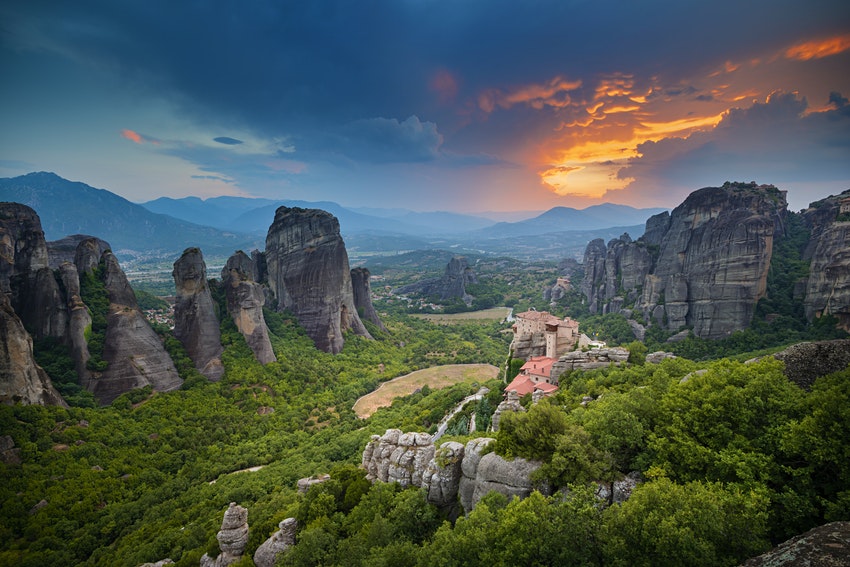 Magnificent Meteora will leave you speechless. Soaring pillars of rock jut heavenward, a handful complete with monasteries perched on their summits. Built as early as the 14th century, these were home to hermit monks fleeing persecution. The rope ladders that once enabled the monks to reach the top have long been replaced by steps carved into the rock, and six of the 24 monasteries remain open to resident monks and visitors alike. Today this spectacular stone forest beckons pilgrims and rock climbers from around the world. 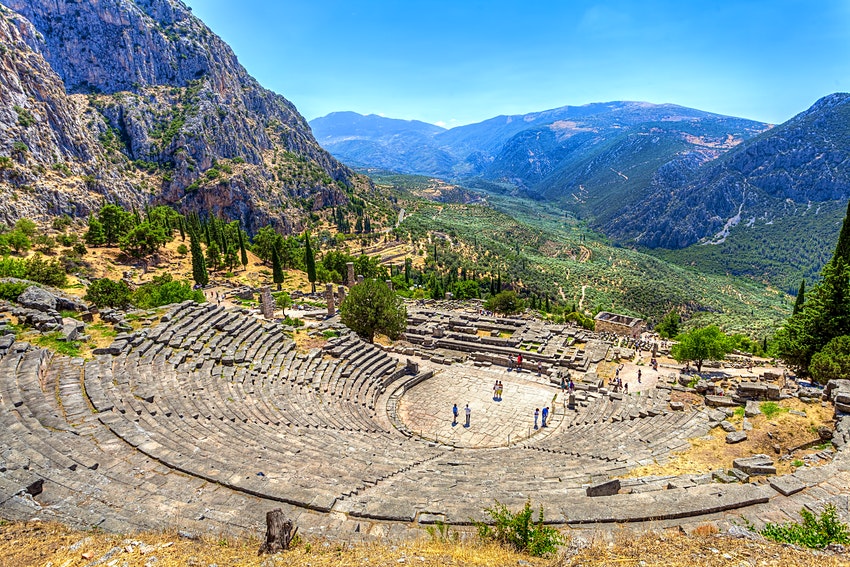 Let your imagination soar at Delphi

Early morning is a magical time at Delphi, as the sun’s rays pour over the Sanctuary of Athena Pronaia. As you gaze out over the Gulf of Corinth, it is easy to understand why the ancient Greeks chose this as the center of their world. Today, only three columns remain of the magnificent sanctuary, but that’s enough to let your imagination soar. Nearby, the Sacred Way meanders past the Temple of Apollo where prophecies were uttered that sent armies to battle and made lovers swoon. 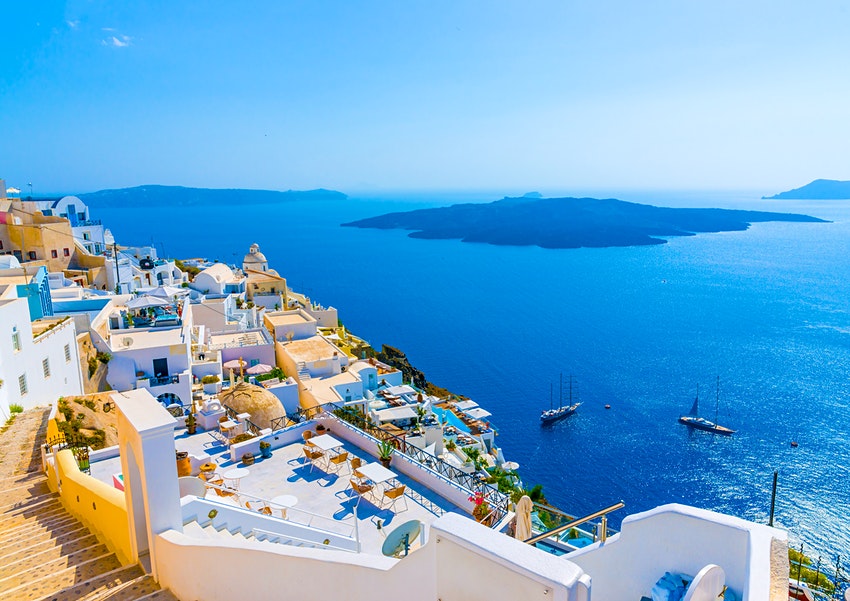 From the spirited nightlife and celebrity hideaways of Mykonos and Ios, to the isolated sandy coasts of tiny, far-flung specks such as Anafi, hopping through the Cyclades is a Greek experience not to be missed. Peppered with ancient ruins (try Delos), mystical castles (head to Naxos), lush scenery and dramatic coastlines (visit Milos), the islands are spread like Greek jewels across the sea. Speed over the Aegean on catamarans and sway on old-fashioned ferry boats – you won’t regret a single saltwater-splashed second of it. 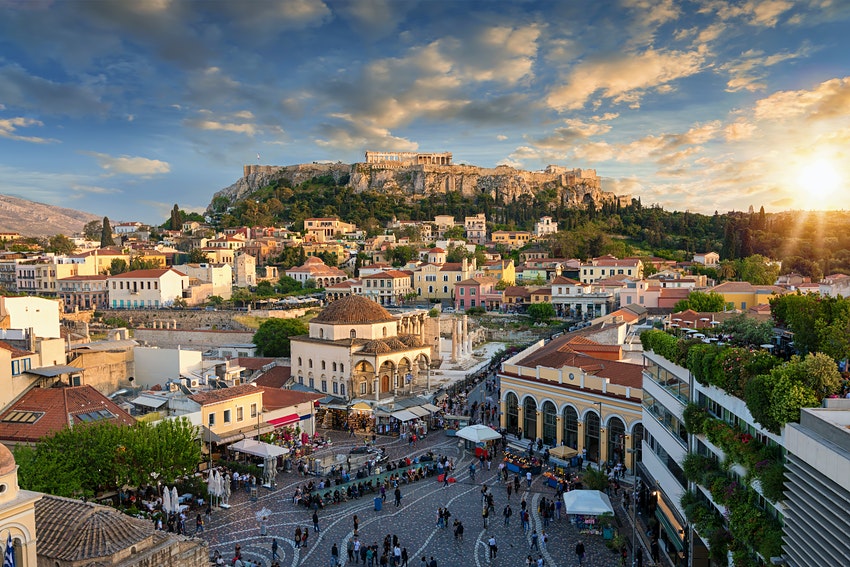 Life in Athens is a magnificent mash-up of both the ancient and the contemporary. Beneath the majestic facades of the many venerable landmarks, the city is teeming with life and creativity. Galleries and clubs hold exhibitions, performances and installations of the city’s booming arts scene. Street art is all around. Fashionable restaurants and humble tavernas rustle up plate after plate of satisfying fare. Soulful rembetika (blues songs) serenade the cobbled streets, while cocktail bars and nightclubs abound and swing deep into the night. 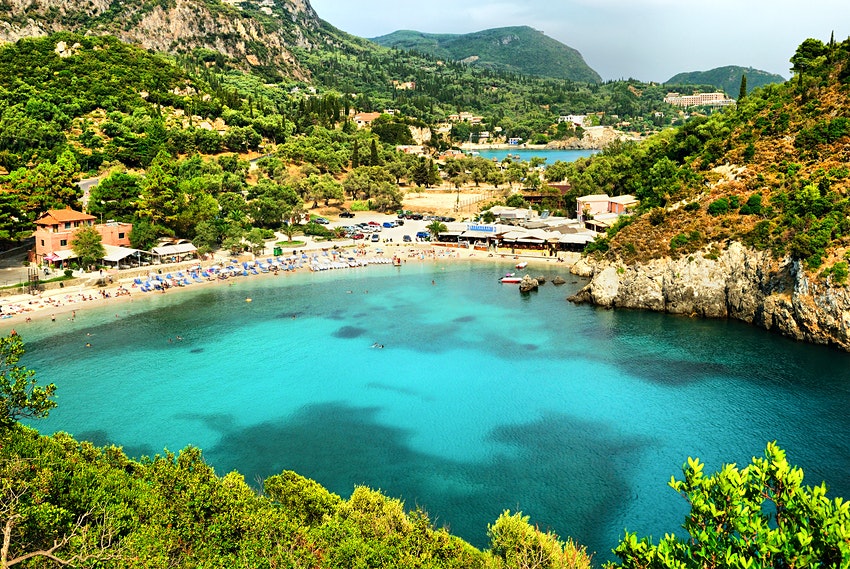 The story of Corfu is written across the handsome facades of its main town’s buildings. This is a place that crams a remarkable mix of architecture into its small circumference. Stroll past Byzantine fortresses, neoclassical 19th-century British buildings, Parisian-style arcades, Orthodox church towers and the narrow, sun-dappled streets of the Venetian Old Town. Beyond the town, Corfu is lush green mountains, rolling countryside and dramatic coastlines. And if the architecture and scenery aren’t enough, come to enjoy the Italian-influenced food. 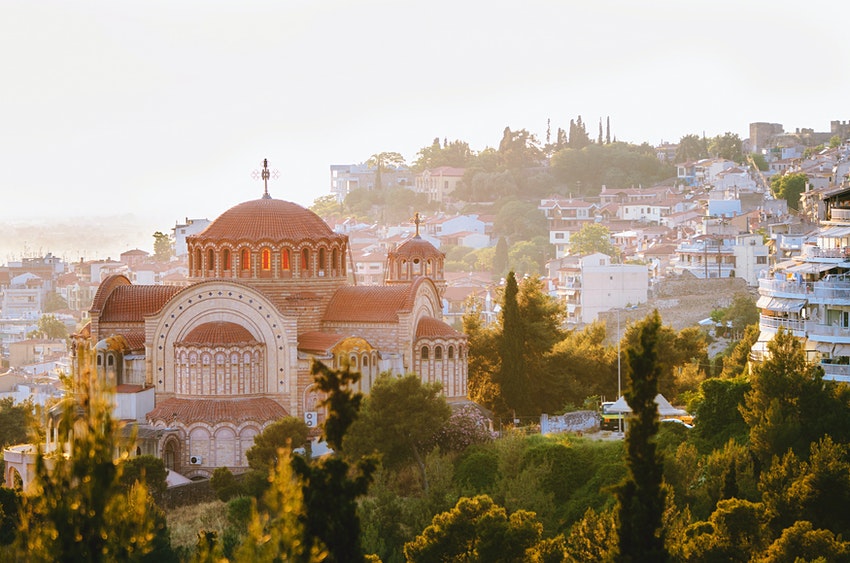 Stylish Thessaloniki remains northern Greece’s liveliest town, thanks to its universities, cultural scene, arts and nightlife. Explore the old quarter, a neighborhood full of colorful, winding streets marked by white-plastered houses, lazy cats and Byzantine churches. Taste-test your way through the city’s zaharoplasteia (patisseries) for Ottoman-inspired sweets. Drink up with throngs of students at stylish bars and clubs. Tour the galleries of one of the country’s most artistically fertile locations and save time for the first-rate museums. Thessaloniki has it all going on. 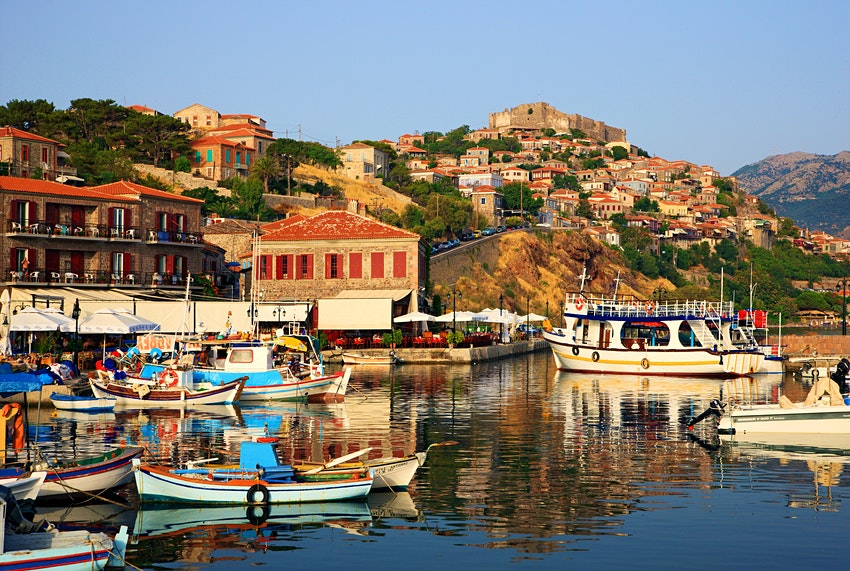 A magnificent guest from Asia Minor, the well-preserved medieval Ottoman town of Molyvos in northern Lesvos displays a happy marriage of gorgeous landscape and gracious architecture. Sitting on top of an elegantly curving headland and crowned with a Byzantine castle, it faces west as if inviting the setting sun to touch the red-tiled roofs and bobbing yachts in its pretty marina. Life moves pretty slow here, pull up a chair and relax. 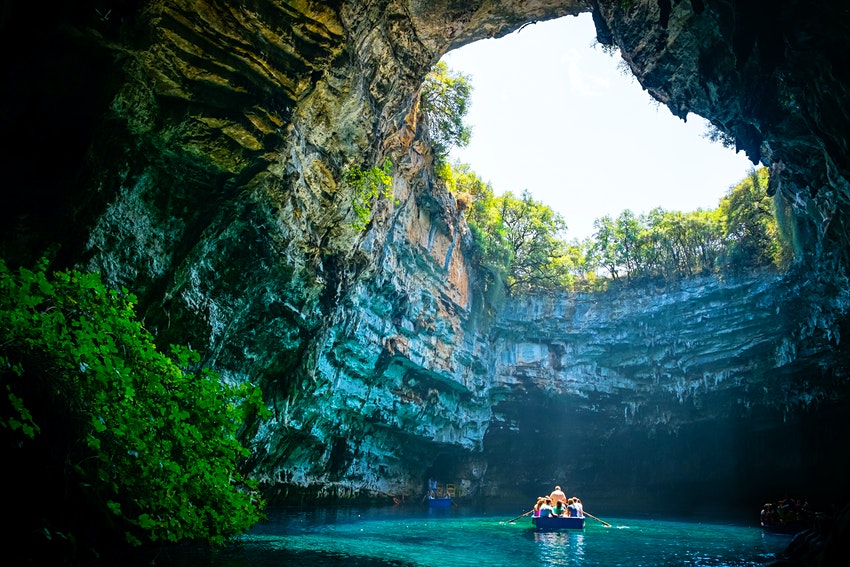 Get outdoors in Kefallonia

Kefallonia is a paradise for lovers of the great outdoors. Paddle kayaks between white-sand beaches lapped by gentle seas that glow with an unnatural luminosity; explore pretty villages surrounded by vineyards and olive groves; scuba-dive in crystal-clear waters blushing with fish; and hike up mountains that spiral high into the sky. Kayaking, diving, hiking, sailing, horseback riding – you name it and Kefallonia does it. And best of all it remains remarkably unflustered by tourism. 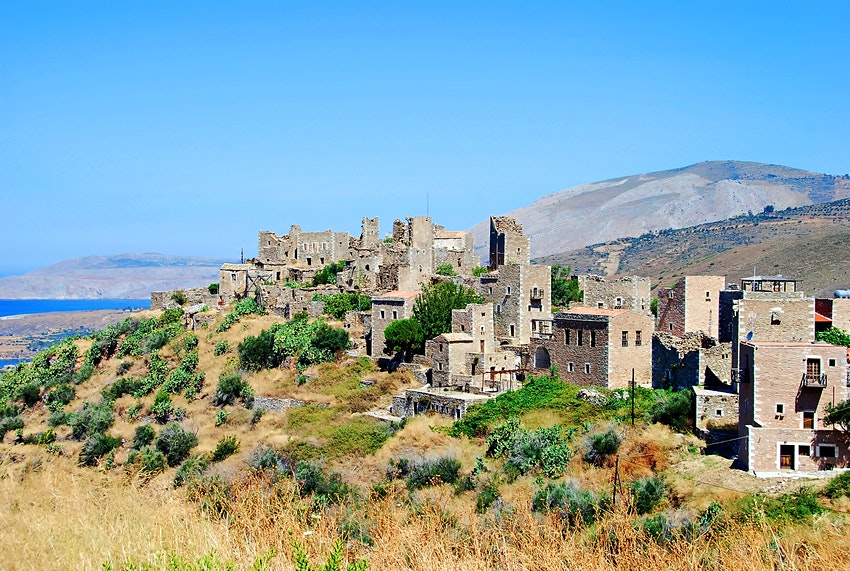 Soak up the landscapes of the Mani Peninsula

Although it can no longer be described as “remote”, the Mani holds a magic unlike anywhere else in Greece. For centuries, the feuding families here were literally a law unto themselves and this has contributed to the unique Maniot culture. The Mani’s footpaths and landscape beckon hikers from around the world. With everything from rugged rocky highlands and hidden lush green oases to small fishing tavernas and severe rock-solid tower houses, this pocket of the Peloponnese is well worth exploring. 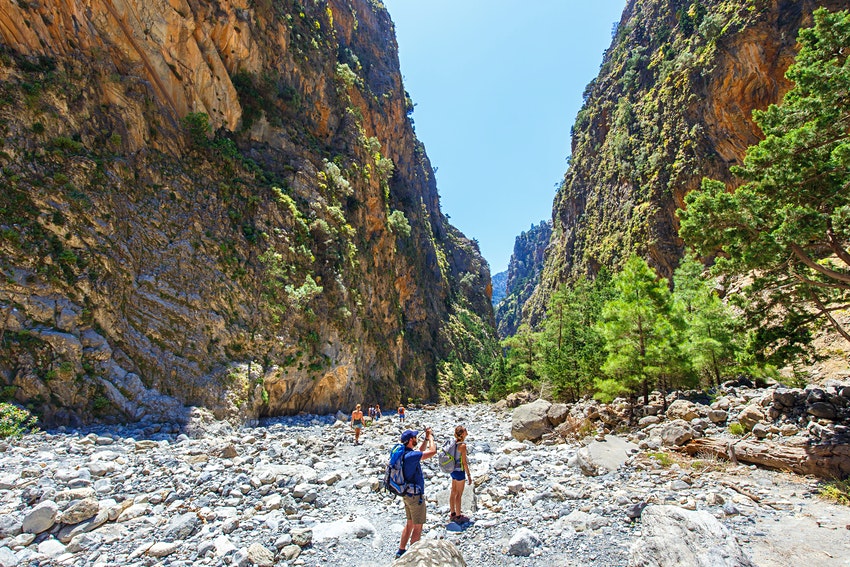 The dramatic gorge of Samaria is the most-trodden canyon in Crete – and with good reason. Starting near Omalos and running down through an ancient riverbed to the Libyan Sea, it’s home to soaring birds of prey and a dazzling array of wildflowers in spring. It’s a full-day’s walk (about six hours down) but the jaw-dropping views make it worth every step. To get more solitude, try lesser-known Imbros Gorge, which runs roughly parallel to Samaria and is around half the length. 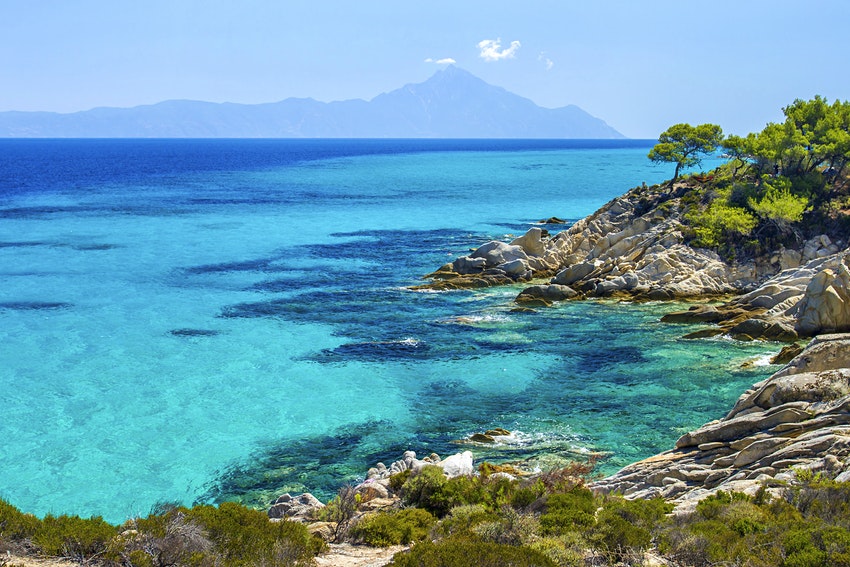 Be beckoned to Halkidiki

Northern Greece’s Halkidiki stretches out into the Aegean like a fat fist with three enticing fingers of sand and sun-soaked bliss. Kassandra Peninsula buzzes in summer with open-air discos and umbrella-peppered beaches, while Sithonia Peninsula is quieter and reserved for escapists on its sandy shores. Athos Peninsula offers stunning beaches and is also home to the men-only preserve of Mt Athos, a monastic community that has kept its Byzantine rituals for more than 1000 years. 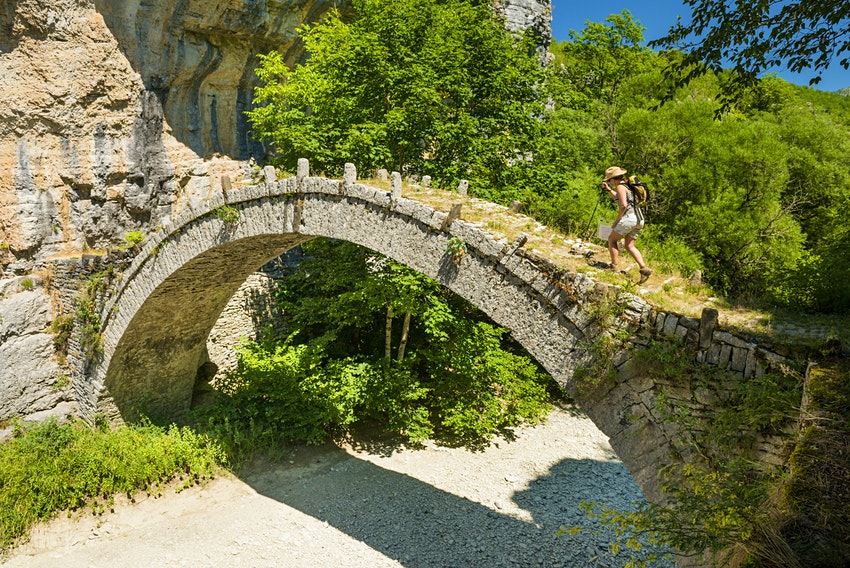 After passing through a seemingly endless array of tunnels, the Egnatia Odos Hwy brings you into rugged Epiros, home of the Pindos Mountains and the Zagorohoria – an immaculately preserved region of traditional villages spread along the ridges of Europe’s deepest canyon, the Vikos Gorge. Here, the air is clear, fresh and cool, and the views astounding. You can explore the region by hiking or mountain biking, or simply get cozy by the fire in one of the many rustic B&Bs dotting the region.