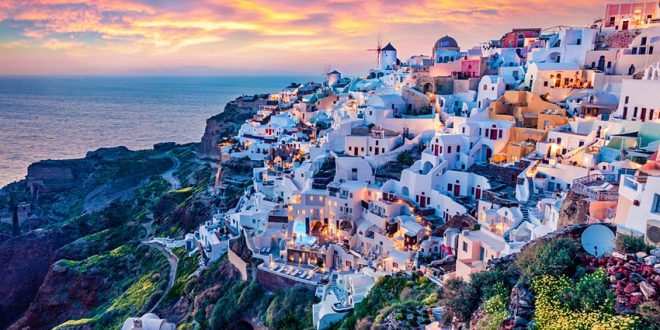 Santorini is the supermodel of the Greek islands, a head-turner whose face is instantly recognizable around the world: multicolored cliffs soar out of a sea-drowned volcanic crater, topped by whitewashed buildings.

With its reputation for dazzling panoramas, romantic sunsets and volcanic-sand beaches, it’s hardly surprising Santorini features on so many travelers’ bucket lists. There’s no denying the uniqueness of this place or its huge allure: the island hosts 2 million visitors annually, leading some to question whether Santorini has become a victim of overtourism.

If you’re planning to join the crowd, here’s what you need to know for your first trip to Santorini. 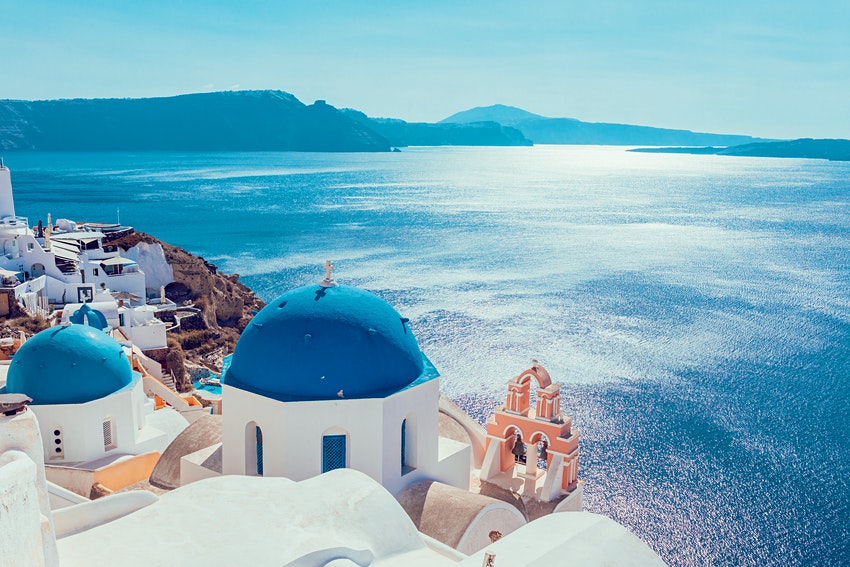 Part of the Cyclades island group, Santorini (officially known as Thira, a name that encompasses the volcanic islets within Santorini’s orbit) sits in the Aegean Sea, roughly halfway between Athens and Crete. The island is shaped like a wonky croissant, and the neighboring islets hint at the fact that Santorini was once circular. It was known as Strongili (the Round One). Thousands of years ago, a huge volcanic eruption caused the center of Strongili to sink, leaving a caldera (or crater) with towering cliffs along the east side, now Santorini’s trademark landscape.

Which part of Santorini should I visit?

Santorini’s commercial development is focused on the caldera-edge clifftops in the island’s west, with large clusters of whitewashed buildings nesting at dizzying heights, spilling down cliffsides and offering gasp-inducing views from land or sea. Fira, the island’s busy capital, sprawls north into villages called Firostefani (about a 15-minute walk from Fira) and Imerovigli (the highest point of the caldera edge, about a 30-minute walk from Fira). A path running through these villages is lined with upmarket hotels, restaurant terraces and endless photo opportunities.

These three conjoined settlements draw most visitors, together with the stunning and quite exclusive village of Oia in Santorini’s north. There’s a growing number of hotels in the island’s south, offering caldera views to the north and northeast. Akrotiri’s views come cheaper than Oia’s, but it’s a fair way from the action of Fira. 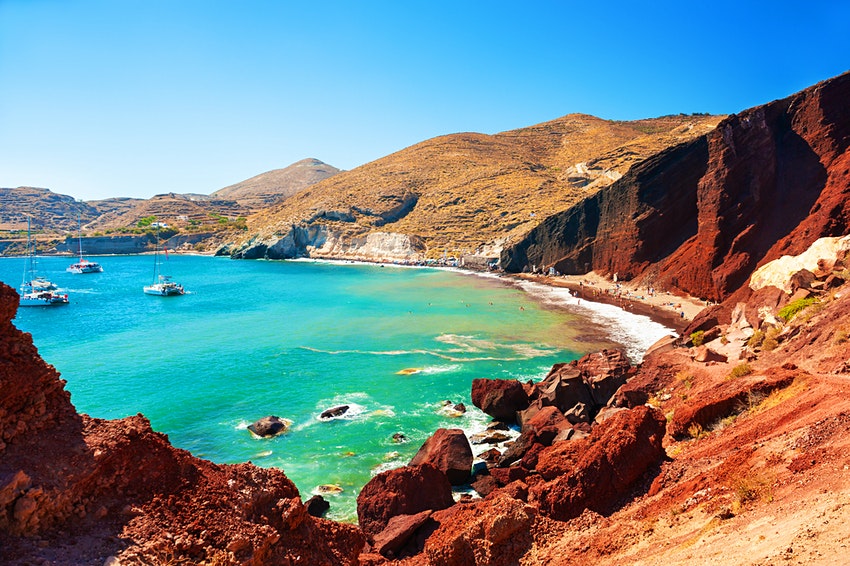 Santorini’s east coast is lesser known than the celebrated, elevated west coast. Here, the caldera-edge heights have sloped down to sea level, and volcanic-sand beaches and resorts offer a very different drawcard. East coast resorts such as Kamari and Perissa have a more traditional (and more affordable) island-holiday appeal: sunlounger-filled beaches, water sports, bars and taverna-lined promenades. The east coast’s beaches are lined with black sand. On the south coast, there’s a string of beaches famed for their multicolored sand. The dramatic Red Beach is a traveler favorite.

The island’s interior is dotted with vineyards and traditional villages that let you see beyond the tourist hustle. Make a stop in Pyrgos for great eats and a wander through charming backstreets. 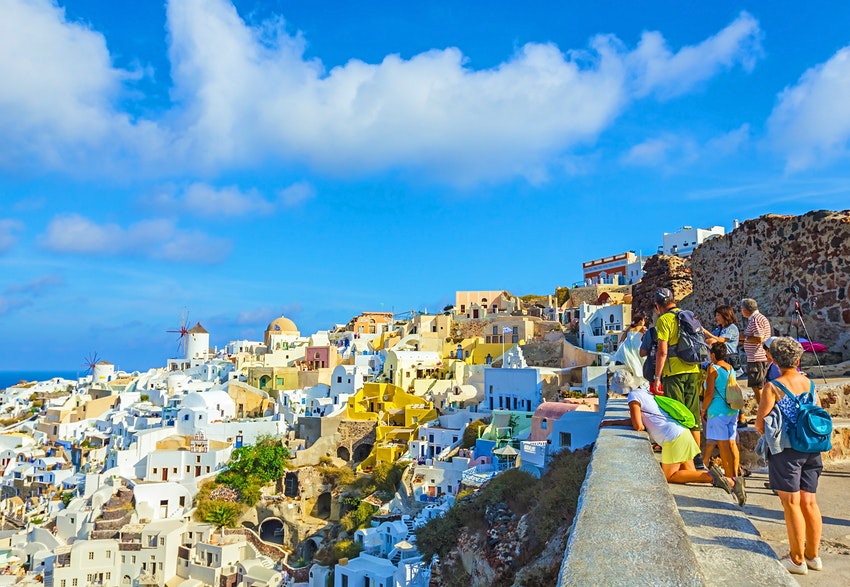 Best things to do in Santorini

Sure, Santorini’s views will stop you in your tracks and you’ll get great glimpses into how A-listers travel, but there’s plenty more to explore, from a gorgeous open-air cinema to a cool microbrewery, wine caverns adorned with artworks, and cooking demonstrations and classes that celebrate Santorini’s growing foodie culture.

The obvious activity in Santorini is to walk the caldera edge and admire the views. Walks in and around Fira are spectacular, particularly heading north to Firostefani and Imerovigli along the caldera-edge pathway. Keep walking and you’ll eventually reach Oia, but be aware that this is no small undertaking and the trail beyond Imerovigli can be rough. It’s about 5.6 miles (9km) in all, and a good four-hour walk one way.

Santorini’s lauded wines are its crisp dry whites and the amber-colored, unfortified dessert wine known as Vinsanto. Both are made from the indigenous grape variety, assyrtiko. About a dozen local vineyards host tastings (usually with a small charge) and some offer food, with scenery and local produce combining to great effect. Start your investigations at SantoWines.

Santorini’s intrigue reaches deep into the past, with the fascinating site of Akrotiri displaying a Minoan city destroyed by the volcanic eruption of 1613 BC. In Fira, the impressive Museum of Prehistoric Thera helps piece together the story of ancient Akrotiri. 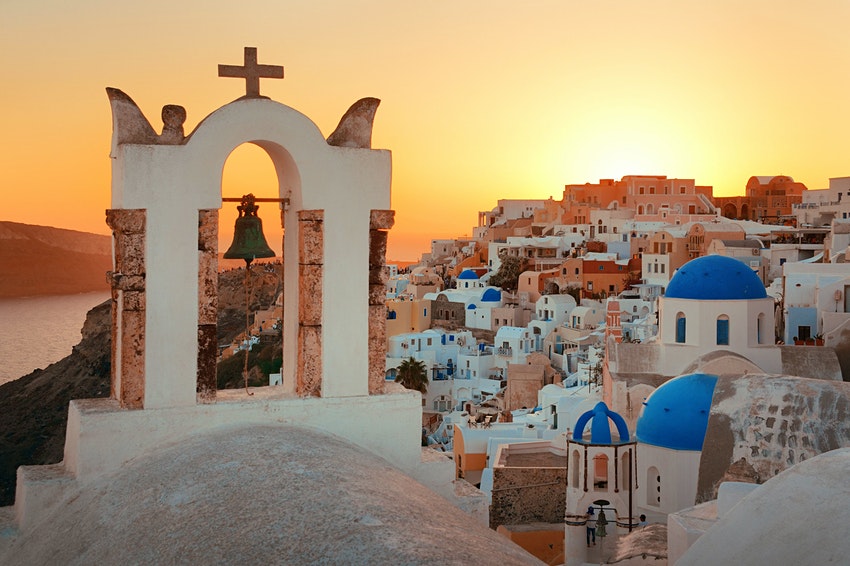 Nature’s handiwork is on display from any waterfront seat come sundown, but prime sunset-viewing on Santorini is in Oia, where thousands of tourists flock to admire (and applaud) nightfall.

Any tour your heart desires can be organized, and there are dozens of agencies ready to help with winery visits, archaeology tours, sunset-watching and more. The most popular option is a cruise, and the classic itinerary takes in the caldera’s volcanic islands of Nea Kameni and Palia Kameni, including a stop at the former’s crater and the latter’s hot springs. 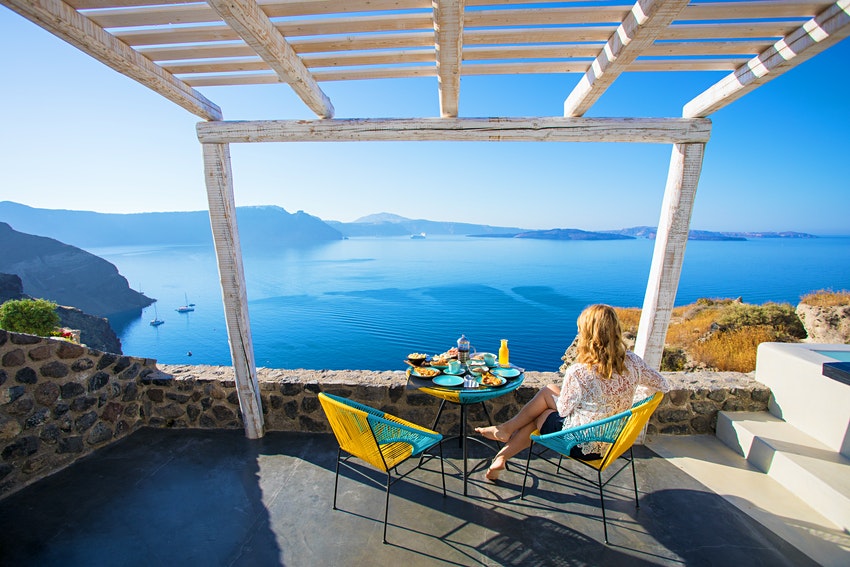 Where to stay in Santorini

If you can afford it, first-timers to Santorini should stay on the caldera edge to experience the full “wow” factor. Fira, Firostefani, Imerovigli and Oia have hotels and villas with whitewashed interiors, terraces and infinity pools that have inspired marriage proposals, high-fashion photo shoots and many Instagram posts. Sadly, there’s not a lot in these view-blessed locales for budget-conscious travelers: caldera-view accommodations come at a premium, and they are in hot demand. Book in advance.

There are decent midrange options in Fira and Firostefani (less so in Imerovigli and Oia), away from the front-row panoramas. There’s also a great hostel and a budget-friendly campground (with rooms) on the outskirts of Fira.

If you’re more interested in a beach break or activities, stay in Perissa or Kamari (and catch the bus into Fira). The advantage of this is some respite from the camera-toting caldera crowds, and more reasonable prices. 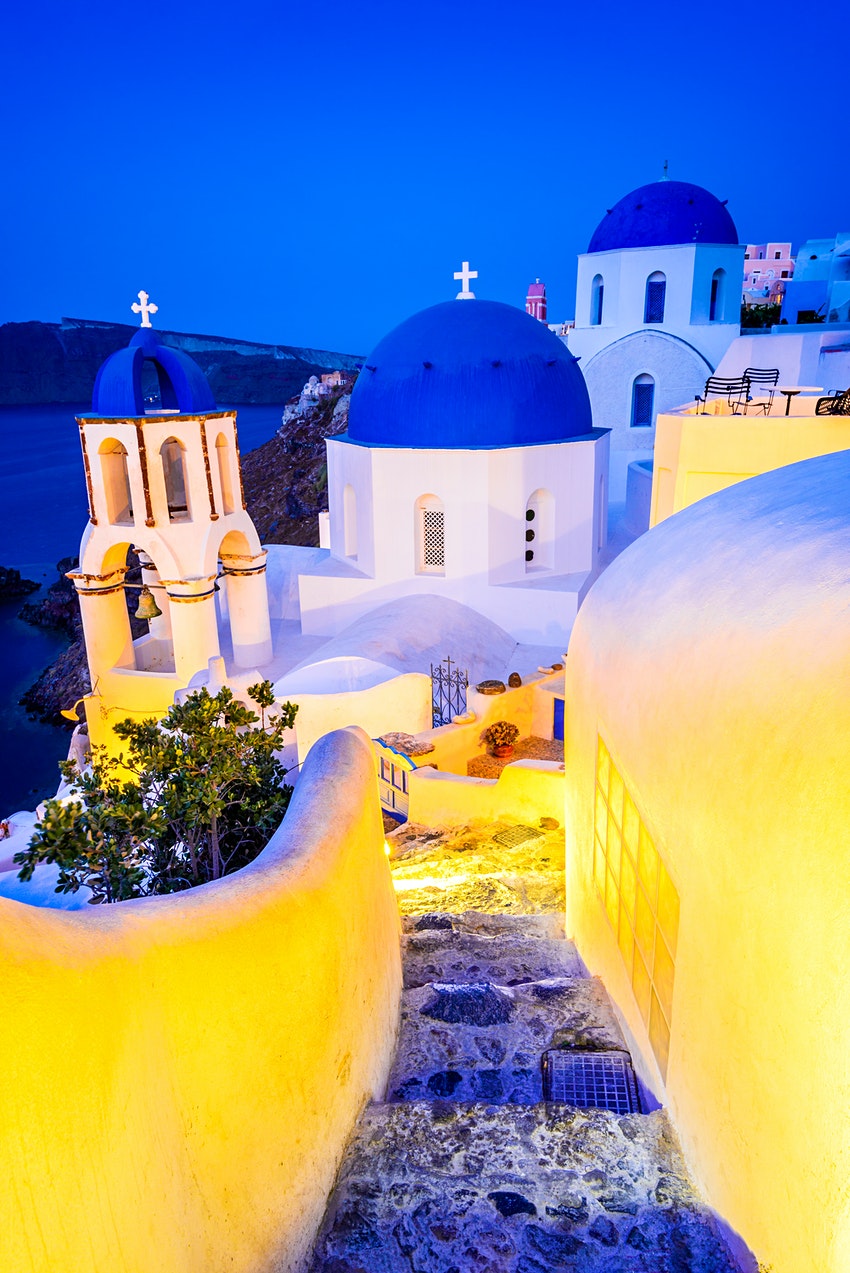 When to go to Santorini

Peak travel time to Santorini is July and August, when prices soar and hotels, viewpoints and beaches are packed with tourists. The shoulder season months of April, May, early June, late September and October are better times to visit. Things are marginally quieter at the caldera edge, and considerably quieter on the east coast (where accommodation bargains are plentiful).

Don’t discount a winter break, when crowds are scarce (and prices low) while the scenery is still breathtaking. Santorini is working on positioning itself as a year-round destination. 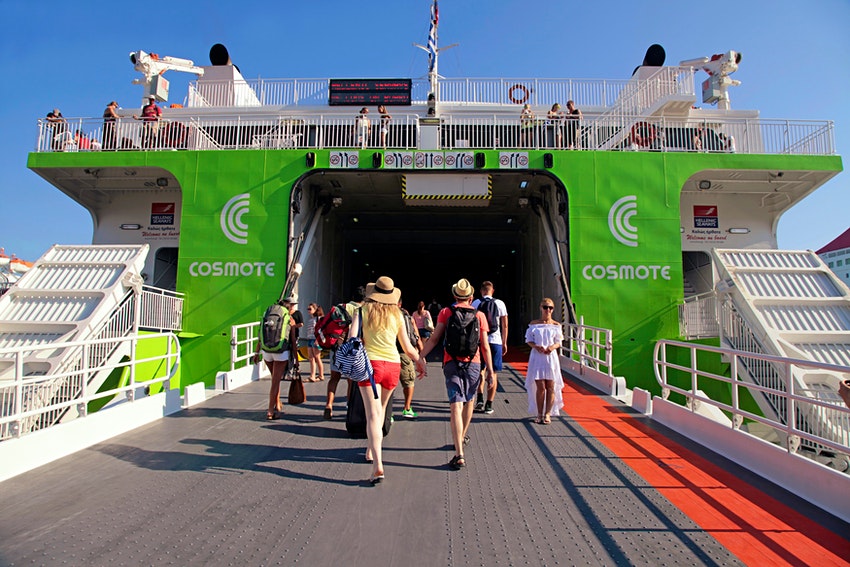 How to get to Santorini

Previous 6 US Dark Sky Parks are right for you
Next US State Department warns against travel to Greece, Ireland and more destinations