The 574-mile route through the Blue Ridge Mountains makes for one of the USA’s legendary drives – every autumn it’s the scene for a drama of change and renewal.

The two roads that run down the spine of the USA’s southern Appalachians, Skyline Drive and the Blue Ridge Parkway, were built specifically for sightseers and tourists. They are winding, sedate – the speed limit never exceeds 45mph – and closed to commercial vehicles. There isn’t a ‘Gas Food Lodging’ sign anywhere in sight, nor a gleam of neon. To find fast food and even gas, you have to leave the route briefly and venture into the back roads of Virginia and North Carolina. Getting your kicks is a possibility, getting lost in the sticks is a virtual certainty.

But the rewards for forgoing roads with higher speeds and corporate amenities are immense. This is a route filled with tales of moonshine, disappearing customs, and the Appalachians’ own take on jazz: old-time music and bluegrass.

It’s getting close to Halloween when I join the northern end of Skyline Drive after a leisurely breakfast in the town of Front Royal. I feel like the slow speed of the roads is the whole point. There’s no-one behind me beeping or impatient to overtake. The route winds through mountain scenery with views that stretch for miles to distant vanishing points; the shades span a vast range: from the yellow of the tulip poplar to the vibrant red of sourwoods and maples. 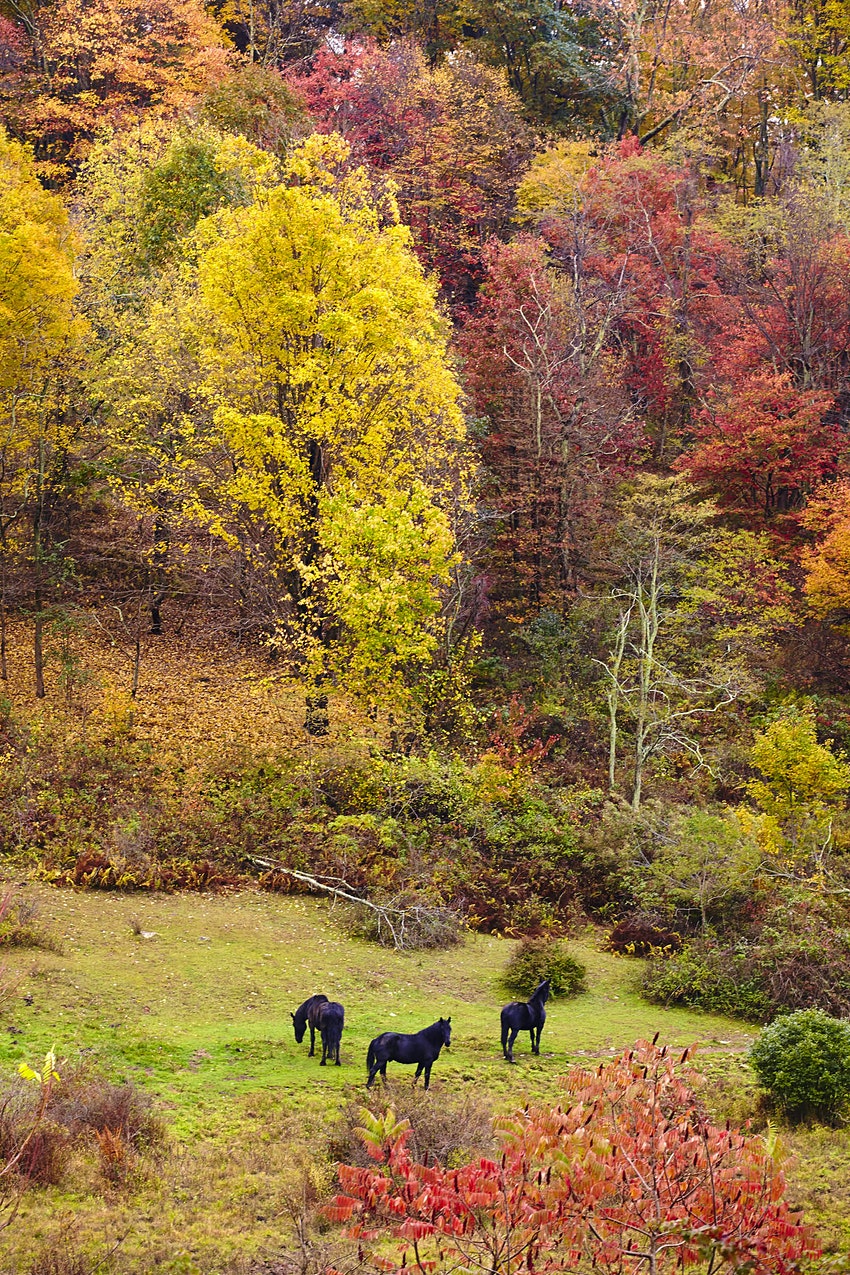 Skyline Drive is the shorter of the two roads, sitting at their combined northern end. At 105 miles long, it can be covered easily in a day, though, at the higher elevations, the weather can be very fickle. Towards mid-afternoon, somewhere around milepost 78, mist swirls over the road and as I slow the car, a strange form appears on the tarmac directly ahead of me. It’s a large black bear, galumphing into the trees on the other side. It’s only visible for a few seconds, but the whole atmosphere of the mountain seems suddenly different: wilder and more threatening.

At milepost 105, skyline drive comes to an end; from here the route continues on the longer Blue Ridge Parkway.

Half a day’s drive along the parkway, close to milepost 213, sits the storied Blue Ridge Music Center. Overnight, high winds have felled a tree and taken down the power lines. Starved of electricity, the videos and recordings in the building don’t work and, suddenly, we’re a bit closer to the music’s roots: two men in a shady corner, playing unamplified instruments, singing about the dark and the light of life in the mountains.

Every afternoon during the months that the doors are open, local musicians play here for free. Today, 72-year-old Bobby Patterson is plucking a resonator banjo, accompanied by Willard Gayheart, 82. The music – gospel and secular – is still a vital part of life in the region. Willard explains that, barely a generation ago, farmers hosted parties as a way of repaying those living close by for their help in bringing in a harvest. Hired musicians and tubs of moonshine would be the reward for a day of collective effort.

The ranger at the Blue Ridge Music Center rolls her eyes when I show her where I’m headed on the map. There’s a weather warning: more heavy rain and high winds are expected towards evening. To stay off the top of the parkway, I leave the route and take the state roads, crossing the border from Virginia into North Carolina and passing small towns, Baptist churches, commercial Christmas tree plantations, and huge patches of pumpkins, grown for Halloween.

But there’s no avoiding the Blue Ridge Parkway. I’m booked to stay in a cabin near to milepost 256, so in the late afternoon, I bid small-town America farewell and head off back up the mountain. The weather is worsening and the road has become astonishingly eerie: a riot of windblown leaves, heaving branches and fog gathering in the dips. By some miracle, I find the lodge just as night is falling. My cabin, overhung with waving branches and sitting in a hollow, clearly resembles the set of a horror film, but tucked up safely in bed, I hear no bears, or serial killers, just the death-throes of the storm.

By morning, the bad weather has finally passed. The rain and wind have denuded many trees, but the sun blazes through the ones that are left. At Linn Cove Viaduct I drive through some of the most uplifting scenery of the whole route. The viaduct itself is an architectural marvel. The last section of the route to be constructed, it was designed to have minimal impact on its surroundings. It seems to float above the slopes of Grandfather Mountain. From it, I look down on the huge belt of uplands that spread along the eastern seaboard of the United States all the way from New Jersey to Alabama.

I turn-off at milepost 385 to the town of Asheville, with barely half a day’s drive to go until the southern end of the parkway. It’s a good place to stop and celebrate the journey’s conclusion – a lively, affluent place with a dynamic music and arts scene.

At the recommendation of two local musicians, I head to a bluegrass night in Jack of the Wood, one of Asheville’s live-music venues. The audience includes its share of flannel-shirted hipsters and the evening is a celebration of what’s local, renewable, homemade. It seems that just as Appalachia’s last mountain people are relinquishing their old ways, a new generation is looking to them for inspiration.