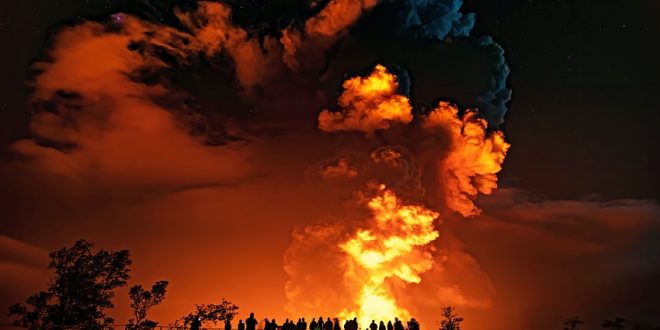 As thousands of spectators converge on Hawaii’s Big Island to see the Kilauea volcano in action, park officials are urging caution – both in light of the active eruption and the worldwide pandemic.

Located alongside the famed Mauna Loa in Hawaii Volcanoes National Park, Kilauea began to erupt around 9:30 p.m. on December 20. At its summit, Halmemaʻumaʻu Crater began to glow, and the lake of water that had been growing inside the crater since 2019 – the first time in modern memory such a phenomenon had occurred – vaporized as lava pushed through the crater walls. The molten rock, which hadn’t been seen on the island since 2018’s catastrophic event, erupted in fountains that hit heights of up to 165 feet (50 meters) – and naturally, visitors were eager to catch a glimpse of it all.

“People seem to be flocking to the Kilauea Overlook because it is the highest viewpoint right now where you can get a little bit of an elevated view into the crater,” Hawaii Volcanoes public affairs specialist Jessica Ferracane tells Lonely Planet. “The lava can’t be seen – it’s deep within Halmemaʻumaʻu Crater right now – but what you can see at night is this incredible, beautiful glow from the lava illuminating the plume of gas and steam that’s rising from the crater. So people understandably want to see that.”

READ  Where To Try Skydiving 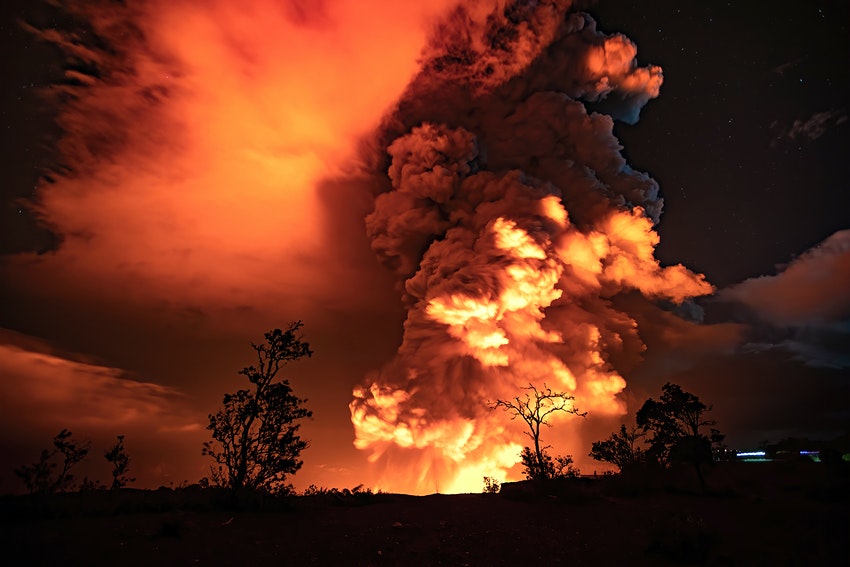 Ferracane says traffic through the park gates has increased tenfold since the eruption began on Sunday night, and the influx of visitors is proving difficult to handle. “Right now, part of the park mission is to provide safe access to active volcanism,” she says, adding that park rangers are doing their best to redirect people away from the overlook to alternative viewing areas like Waldron Ledge, Keanakākoʻi, and behind Volcano House. For safety purposes, officials are also asking visitors to keep out of closed areas, stay on trails and away from cracks in the crater’s edge, to dress appropriately for the summit (it’s cool up there at 4000 feet), bring a flashlight for visits at night or before sunrise, and above all, be patient, wear a mask, and keep your distance.

“The return of lava to the summit of Kilauea is a natural wonder, but we need the public to be fully aware that we are in the middle of the COVID-19 pandemic and to recreate responsibly, maintain social distance and to wear a mask,” Hawaiʻi Volcanoes National Park superintendent Rhonda Loh said in a statement. “We want to keep the park open for all to experience this new phase of volcanic activity, and we need visitors to follow safety guidelines that keep everyone safe.” 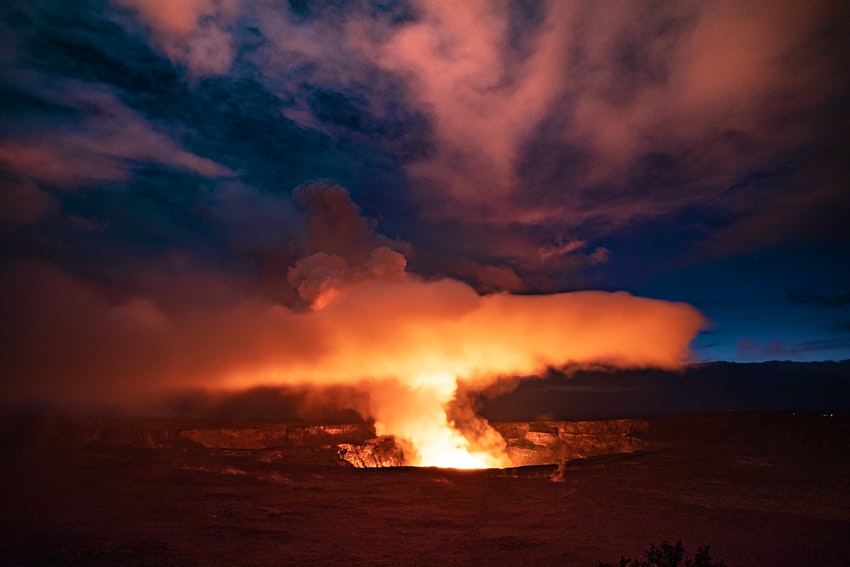 “Our speed limit is 15 miles an hour right after you enter the park,” Ferracane says. “We’re really urging visitors to slow down, to drive safely, and to expect long waits for parking spots… People [have been] walking around in closures that are very dangerous and very close to the crater edge, which is undermined because of the summit collapse in 2018. And in general, we just have very unsafe behavior – not only going into closed areas and walking too close to the edge but also not being masked, and not practicing social distancing. We’re managing an active eruption, which of course people are dying to see, but we also have COVID happening, so it’s a double-edged sword.”

So far, the park has issued a handful of citations to people in restricted areas. “It might not look dangerous, but after dark, there’s earth cracks that have happened up here since the 2018 eruption. And [if you] fall into them, you [could] break an ankle or worse,” Ferracane says. “Getting close to the crater’s edge is not good either because it is undercut right now, and we’ve had such an increase in seismicity that all it takes is one good shake and that portion of the cliff edge can fall into the crater – and that’s about a 400-to-500 foot drop. So if you do not stay on trail, and you enter the hazardous areas, you could be killed.”

For now, Hawaii Volcanoes is still open 24 hours a day, but Ferracane notes that could change if visitors can’t follow the rules. The backcountry areas of the park, including Halapē, Kaʻaha, and even the summit of Mauna Loa have already been closed for overnight use, a practical decision based on allocation of resources until reinforcements arrive. “These areas are far from the summit of the Kilauea,” Ferracane says, “but we are going to close access because it’s all hands on deck up here at the summit. And if something happened to somebody in the backcountry – if they had a heart attack or heat stroke or got lost – we have such limited resources right now that we wouldn’t be able to respond in time. So we are temporarily closing the back country for overnight use until we can get additional park staff to come in, and we are reaching out to other parks in the region to get staff to come in and lend a hand.” 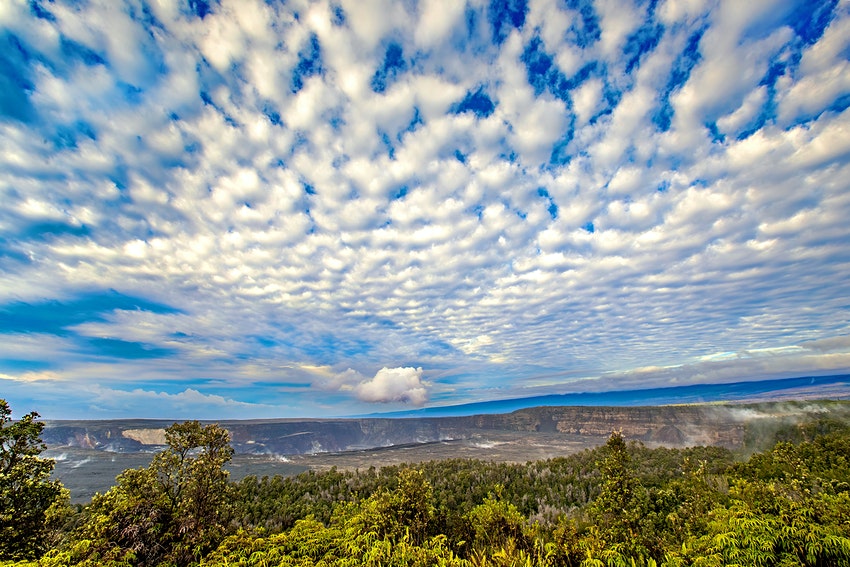 As for the pandemic precautions, “none of this is new,” Ferracane says. “We’ve been dealing with this on a national or global level for almost a year now, so people should already realize that they should be masked if they cannot maintain social distance. And it’s very hard to stay socially distanced right now up at Kīlauea Overlook because there are so many people, you’re basically standing shoulder to shoulder during that peak sunset-viewing time.”

“We’re not kicking people out or giving them a citation if they’re not wearing a mask,” she continues. “Our main priority is just to keep people safe and away from the edge, and hopefully, they will be compliant.”

The volcanic gases emitting from the crater are hazardous, especially to people with heart or respiratory problems, infants, young children and pregnant women. For information on the current conditions at Kilauea and the park in general, visit nps.gov.