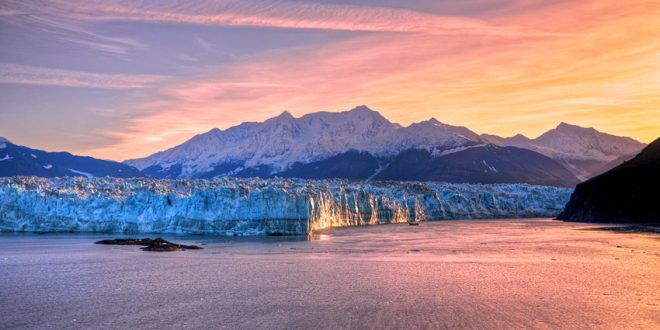 The Natural Beauty And Scale of Alaska: A Visual Treat Awaits You

The natural beauty and scale of Alaska is difficult to convey if you’ve never been there – a visual treat awaits you on your maiden voyage! With glaciers bigger than many US states, you’ll never see everything in just the one trip.

We’ve rounded up our best places to visit in Alaska to help you start planning your trip to this incredibly beautiful state. Rest assured you won’t stop at one trip, so there’ll be ample opportunities to tick every one off your bucket list.

Once you realize that Anchorage isn’t simply a big city on the edge of the wilderness but rather a big city in the wilderness, it starts to make sense. The town manages to mingle hiking trails and traffic jams, small art galleries and Big Oil like no other city. Among big chain stores and mini-malls, there are more than 100 miles of city trails meandering in hidden greenbelts and a creek downtown where anglers line up to catch trophy salmon.

Fill your days with a visit the Anchorage Museum, hikes, excellent restaurants tucked away in unassuming strip malls and a climb to the summit of Flattop Mountain, but also make time for an afternoon nap to renew your stamina – who can go to bed when it’s still light outside at 11pm? A bolt of energy surges through downtown Anchorage on any given weekend evening in the summer. Pushcart vendors hawk sausages on 4th Ave, horse-drawn carriages pick up passengers at Hotel Captain Cook, frisbees glide through the air in Delaney Park and a line out the door at Chilkoot Charlie’s waits for the house band to metaphorically blow the roof away. 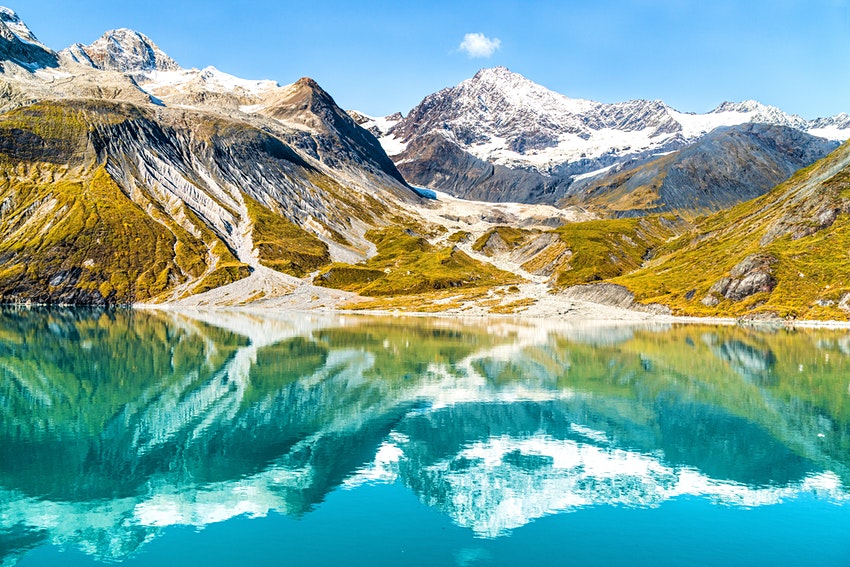 Glacier Bay is the crowning jewel of the cruise-ship industry and a dreamy destination for anybody who has ever paddled a kayak. Seven tidewater glaciers spill out of the mountains and fill the sea with icebergs of all shapes, sizes and shades of blue, making Glacier Bay National Park and Preserve an icy wilderness renowned worldwide.

Apart from its high concentration of tidewater glaciers, Glacier Bay is a dynamic habitat for humpback whales. Other wildlife seen at Glacier Bay includes porpoises, sea otters, brown and black bears, wolves, moose and mountain goats. The park is an expensive side trip, even by Alaskan standards. Plan on spending at least $400 for a trip from Juneau. Of the 500,000 annual visitors, more than 95% arrive aboard a ship and never leave it. The rest are a mixture of tour-group members, who head straight for the lodge, and backpackers, who gravitate toward the free campground. 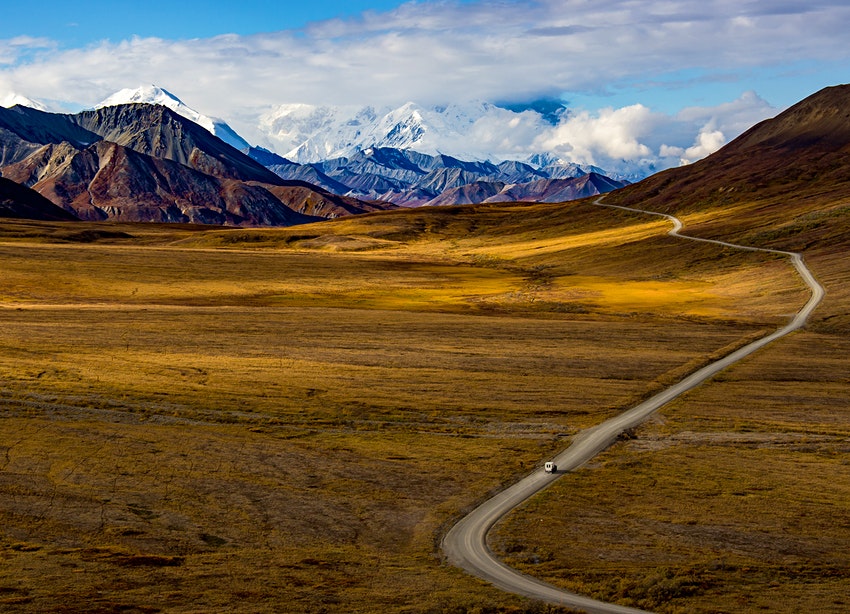 The Athabascans christened it the ‘Great One,’ and few who have seen this 20,237ft bulk of ice and granite would disagree. Viewed from the Park Rd of its eponymous national park, Denali chews up the skyline, dominating an already stunning landscape of tundra fields and polychromatic ridgelines. The mountain inspires a take-no-prisoners kind of awe, and climbers know that feeling well.

Denali attracts over a thousand alpinists every summer. Far more popular is the surrounding national park, a 6-million-acre wilderness replete with wildlife that’s easily accessible on a bus. 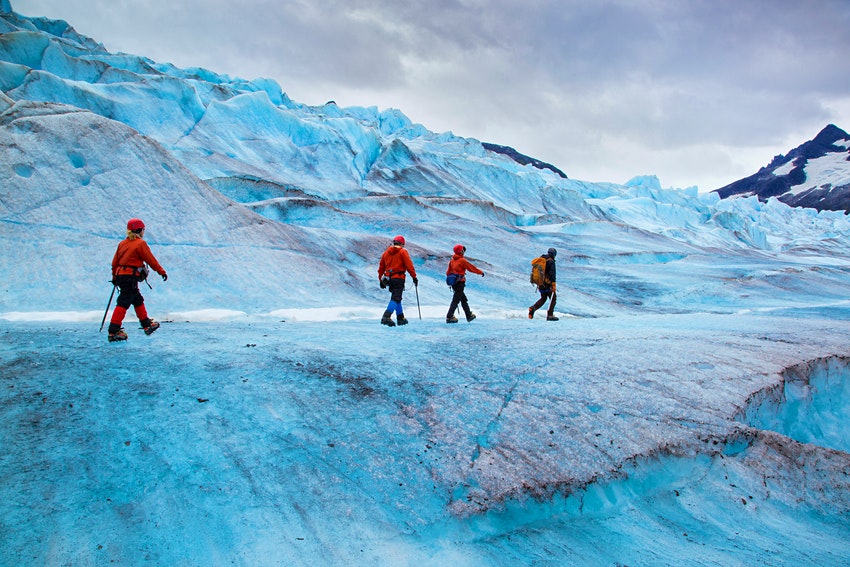 Glaciers are often discussed with a linguistic flourish – noble ice, majestic mountains or sublime grandeur. There’s a reason onlookers raid dictionaries to describe their unique beauty: places like the Mendenhall Glacier demand weak-kneed prose. Take a hike around this river of ice that tumbles out of the mountains, stand in the gaping mouth of an ice cave or watch the parade of icebergs that the glacier discharges into the Mendenhall River. It may not last: scientists say most of it will be gone in 25 years. 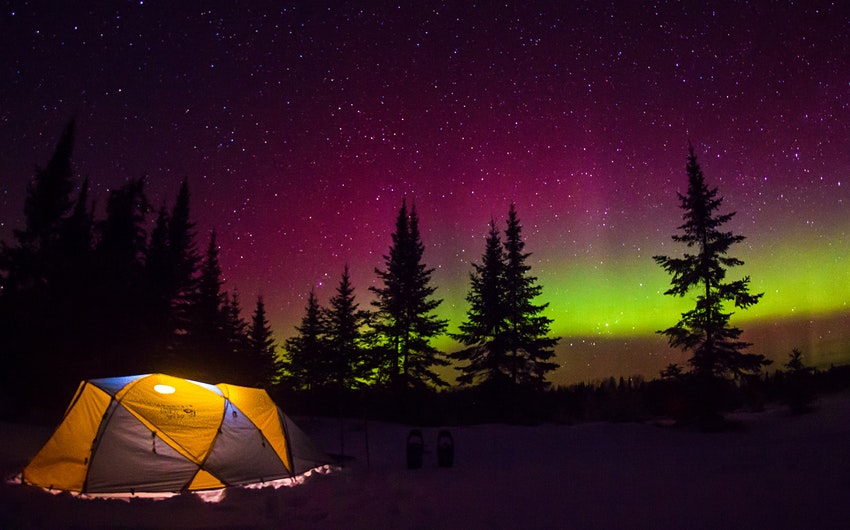 Natural spectacles don’t get much better than this surreal, solar-powered jig. And while a good glossy photo can do the colors of the aurora justice, it simply can’t capture the magic of a live performance. Starting in late August, Fairbanks is the undisputed capital with 200 shows a year. Whistle when the aurora is out, some locals say, and you can influence its movements.

See also  US opens up to fully vaccinated travellers 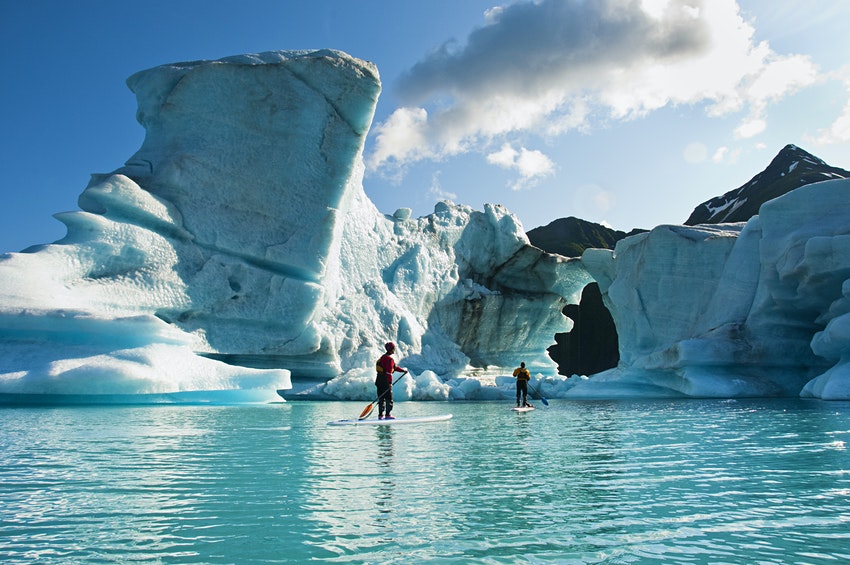 Kenai Fjords National Park was created in 1980 to protect 587,000 acres of Alaska’s most awesome, impenetrable wilderness. Crowning the park is the massive Harding Ice Field; from it, countless tidewater glaciers pour down, carving the coast into dizzying fjords. As you paddle you might be treated to the thunder of calving tidewater glaciers, the honking and splashing of sea lions at a haul-out or the cacophony of a kittiwake rookery. Near Peterson Glacier plump harbor seals bob on glacier ice, and breaching whales often perform at the mouth of Resurrection Bay. Getting an orca’s-eye view of this rich marine ecosystem is just one of the many rewards of propelling yourself on a kayak through the rocking waters of Kenai Fjords.

With such a landscape – and an abundance of marine wildlife – the park is a major tourist attraction. Unfortunately, it’s also an expensive one. That is why road-accessible Exit Glacier is its highlight attraction. Hardier souls can ascend to the Harding Ice Field from the same trailhead, but only experienced mountaineers equipped with skis, ice axes and crampons can investigate the 900 sq miles of ice. The majority of visitors either take a quick trip to Exit Glacier’s face or splurge on a tour-boat cruise along the coast. For those who want to spend more time in the park, the coastal fjords are a blue-water kayaker’s dream. 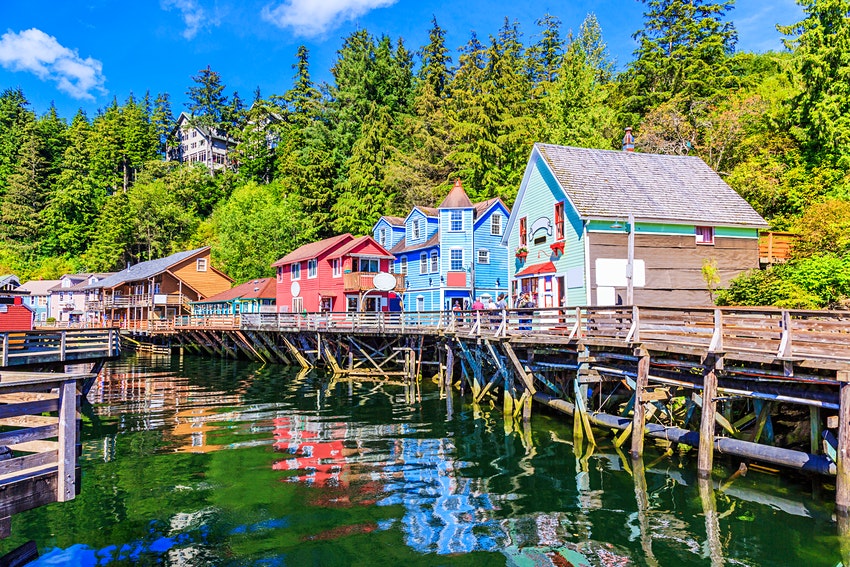 Though Anchorage is now the biggest ‘Native village’ by population, and non-indigenous influences are seen everywhere, the essence of traditional culture lives on in settlements across the state. Most are just a bush-plane flight away, but the best way to begin your understanding is to visit an urban cultural center run by Alaska Natives.

At the vanguard of a recent Alaska Native renaissance is Sealaska Heritage in Juneau, with its collection of ceremonial masks. Also fascinating are some historic house posts in Haines and a revived Haida cultural village in Kasaan. Totem poles and clan houses provide a metaphoric window into Tlingit, Haida and Tsimshian culture in and around Alaska’s ‘first city’, Ketchikan. 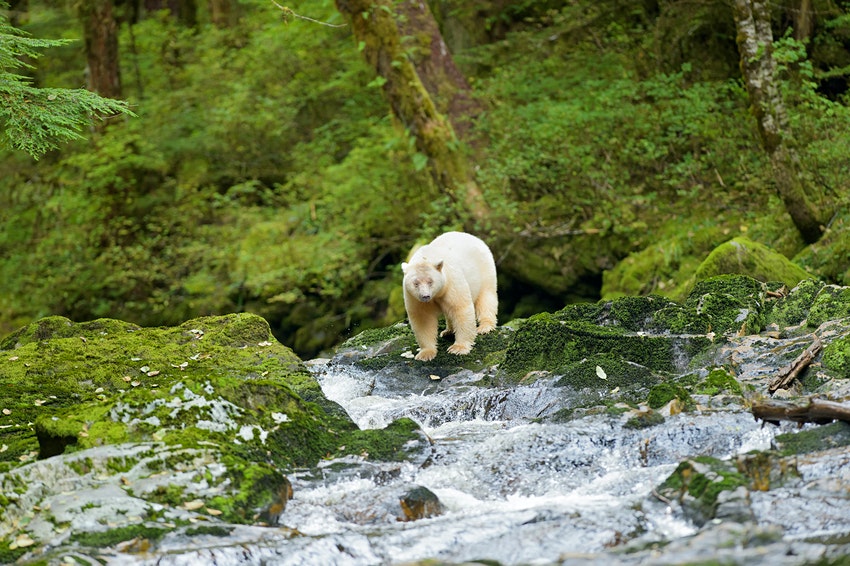 Kodiak is the land of humongous brown bears and lucrative crab fishing, where verdant mountains shelter quiet, crescent-shaped bays, and the people of the eponymous main town grin contentedly in their daily lives. Rarely visited by big cruise ships, the US’s second-largest island is Alaska at its most authentic.

You’d be mad to miss the bear-viewing and the phenomenal fishing potential, but reserve extra time to investigate Kodiak’s less heralded attractions, including WWII military batteries, onion-domed Russian churches and roughshod day hikes on the cusp of an ethereal wilderness. 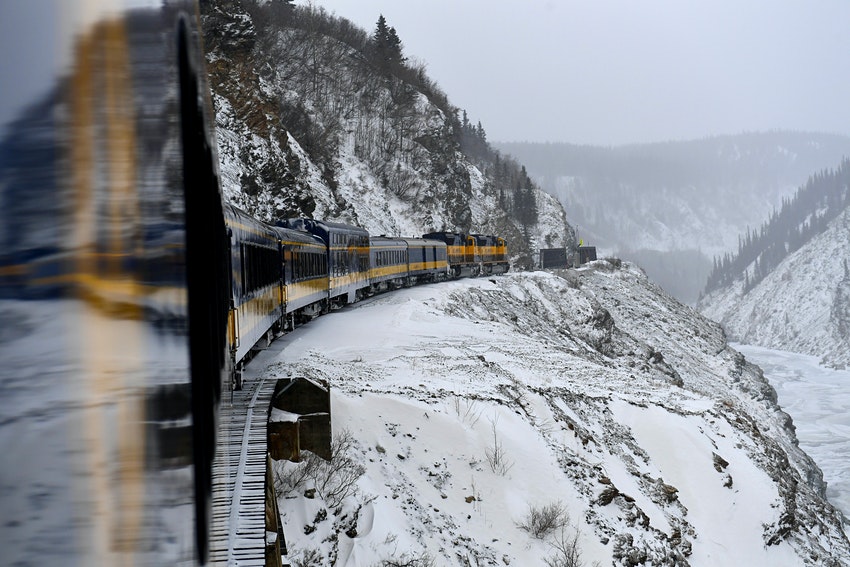 The northernmost railway line in the US was one of the triumphs of Gilded-Age engineering when President Warren Harding ceremoniously banged in the last spike in 1923. Nearly a century later, the railway continues to work its steely magic on the Denali Star, a luxury train that plies a route between Anchorage and Fairbanks.

Replete with grazing wildlife, tiny towns and plunging gorges, there’s a lot for passengers to take in, but all else is forgotten when 20,237ft Denali takes its cloudy hat off and shimmers above the forest. 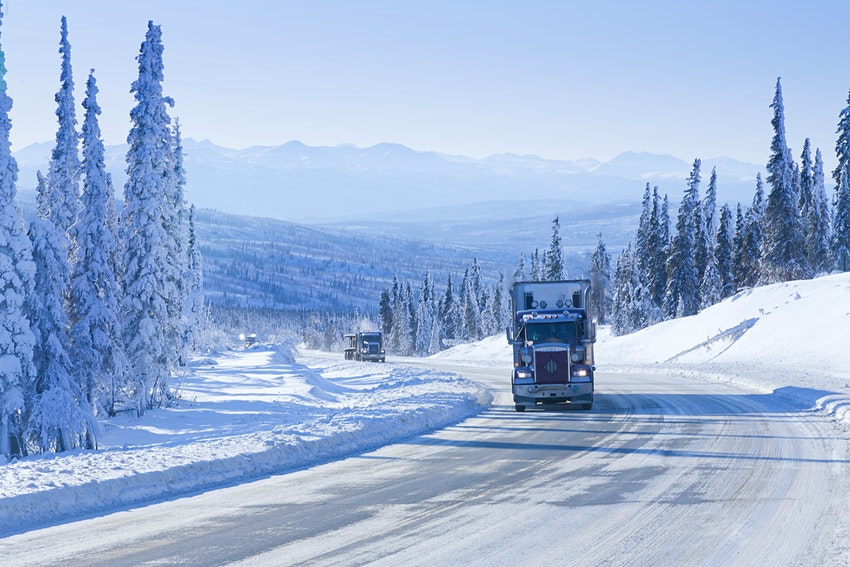 When you look at a map of Alaska, the north coast of the state feels truly remote, a faraway place that seems only reachable by air. But there is a road to the top of the world, and it’s one of North America’s great drives. Belt up, stick some Springsteen on the sound system and get prepared for the ride of your life. The 500-mile trawl up the Dalton Highway from Fairbanks to the Arctic Ocean won’t be the smoothest ride you’ll ever take, but it could well be one of the most legendary. What the infamous ‘haul road’ lacks in asphalt, it makes up for with a succession of surreal ecosystems, from the boreal forests of the interior to the bleak tundra of the North Slope.

This long, winding truck route cuts 414 miles from Alaska’s Interior to the North Slope, paralleling the Trans-Alaska Pipeline to its source at the Prudhoe Bay Oil Field. Along the way it passes evergreen quilts of taiga, the Gothic majesty of the Brooks Range and the chilling flatness of the Arctic tundra. The road is open year-round, but you should only tackle it between late May and early September, when there’s virtually endless light and little snow and ice. Expect a 40mph average and two hard days to reach Deadhorse, at the edge of everything. 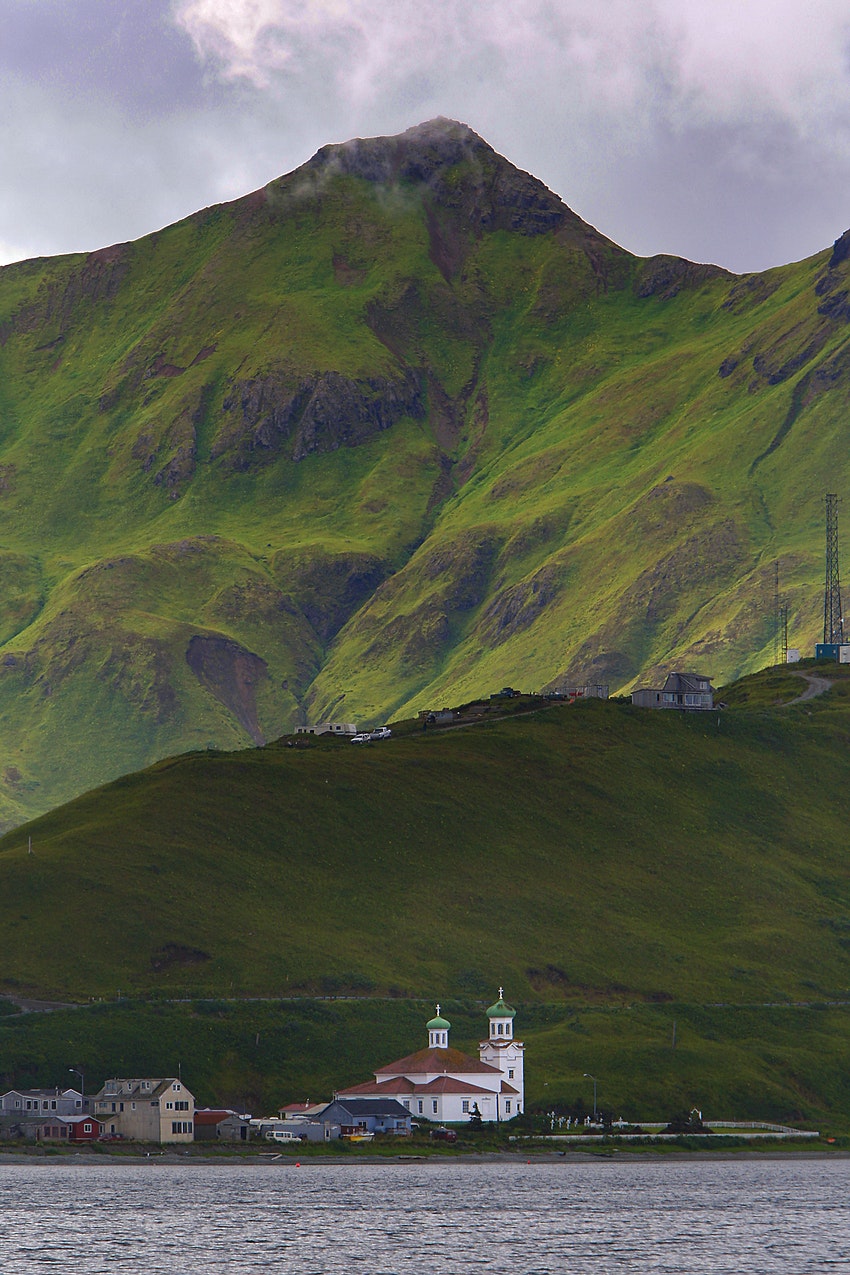 11. Riding the Alaska Ferry to the Aleutian Islands

There’s no experience like it: three nights on a ferry that services remote Alaskan communities far along the tendril of the Aleutian chain. Commercial fishers with plastic bins full of gear, tourists lugging giant camera lenses with the hope of scoping a few birds, and even families returning from a visit to the doctor in Homer are all likely to have traded ‘good mornings’ by the time the ship disembarks in Unalaska. In port locals often pile on board just to take off stacks of hamburgers – the ship cafeteria might be the only restaurant in town.