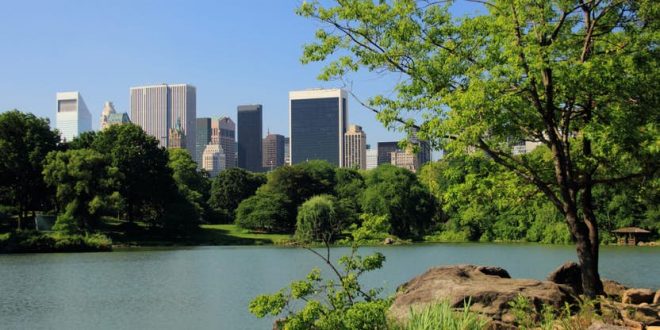 One of the world’s most renowned green spaces, Central Park comprises 843 acres of rolling meadows, boulder-studded outcroppings, elm-lined walkways, manicured European-style gardens, a lake and a reservoir — not to mention an outdoor theater, a memorial to John Lennon, an idyllic waterside eatery (the Loeb Boathouse) and a famous Alice in Wonderland statue. Highlights include the 15-acre Sheep Meadow, where thousands of people lounge and play on warm days; Central Park Zoo; and the forest-like paths of the Ramble.

Like the city’s subway system, the vast and majestic Central Park, a rectangle of open space in the middle of Manhattan, is a great class leveler – exactly as it was envisioned. Created in the 1860s and ’70s by Frederick Law Olmsted and Calvert Vaux on the marshy northern fringe of the city, the immense park was designed as a leisure space for all New Yorkers regardless of color, class or creed. It’s also an oasis from the insanity: the lush lawns, cool forests, flowering gardens, glassy bodies of water and meandering, wooded paths provide the dose of serene nature that New Yorkers crave.

Olmsted and Vaux (who also created Prospect Park in Brooklyn) were determined to keep foot and road traffic separated and cleverly designed the crosstown transverses under elevated roads to do so. That such a large expanse of prime real estate has survived intact for so long is proof that nothing eclipses the heart, soul and pride that forms the foundation of New York City’s greatness.

Today, this ‘people’s park’ is still one of the city’s most popular attractions, beckoning throngs of New Yorkers with free outdoor concerts on the Great Lawn and top-notch drama at the annual Shakespeare in the Park productions held each summer at the open-air Delacorte Theater. Other recommended stops include the ornate Bethesda Fountain, which edges the lake, and its Loeb Boathouse, where you can rent rowboats or enjoy lunch; the Shakespeare Garden, on the west side between 79th and 80th Sts, with its lush plantings and excellent skyline views; and the Ramble, a wooded thicket that’s popular with bird-watchers. While parts of the park swarm with joggers, inline skaters, musicians and tourists on warm weekends, it’s quieter on weekday afternoons, especially in the less-trodden spots above 72nd St, such as the Harlem Meer and the North Meadow (north of 97th St).

Folks flock to the park even in winter, when snowstorms inspire cross-country skiing and sledding or just a simple stroll through the white wonderland, and crowds turn out every New Year’s Eve for a midnight run. The Central Park Conservancy offers ever-changing guided tours of the park, including ones that focus on public art, wildlife and places of interest to kids (check online for dates and times; most tours are free or $15.