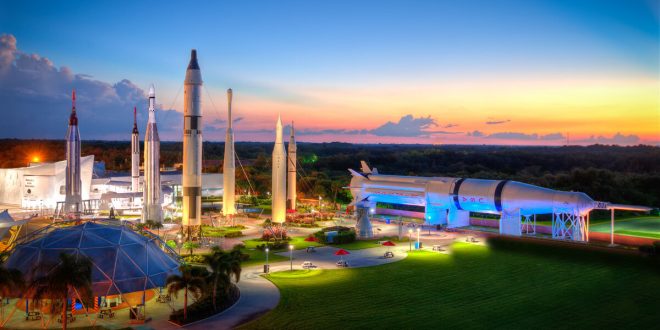 Whether you’re mildly interested in space or a die-hard sci-fi fan, a visit to the Kennedy Space Center is awe inspiring. To get a good overview, start at the Early Space Exploration exhibit, progress to the 90-minute bus tour to the Apollo/Saturn V Center (where you’ll find the best on-site cafe) and finish at the awesome Atlantis exhibit, where you can walk beneath the heat-scorched fuselage of a shuttle that traveled more than 126,000,000 miles through space on 33 missions.

The Visitor Complex, with several exhibits showcasing the history and future of US space travel and research, is the heart of the Kennedy Space Center. Here you’ll find the Rocket Garden, featuring replicas of classic rockets towering over the complex; Heroes & Legends and the U.S. Astronaut Hall of Fame, with films and multimedia exhibits honoring astronauts; and the hour-long Astronaut Encounter, where a real, live astronaut fields questions from the audience. A NASA Now exhibit includes Journey to Mars, a collection of related shows and interactive exhibits, and two delightful IMAX films: A Beautiful Planet offers footage of Earth from space and an optimistic look at the future of the planet (narrated by Jennifer Lawrence), and Journey to Space 3-D features interviews with astronauts and an overview of NASA’s past, present and future endeavors.

The stunningly beautiful Space Mirror Memorial, a shiny granite wall standing four stories high, reflects both literally and figuratively on the personal and tragic stories behind the theme-park energy that permeates the center. Several stone panels display the photos and names of those who died in shuttle disasters.

READ  Where To Try Skydiving

This 90-minute bus tour is the only way to see beyond the Visitor Complex without paying for an add-on tour. The bus winds through the launch facilities to the Apollo/Saturn V Center, where you don’t want to miss the multimedia show in the Firing Room. Video footage on three screens depicts America’s first lunar mission, the 1968 launch of Apollo VIII, before you’re ushered through to an enormous hangar displaying the real Apollo 14 Command Module and the 363ft Saturn V moon rocket. This 6.5 million pound marvel of engineering boosted into space on November 9, 1967.

Tours depart every 15 minutes from 10am to 3:30pm. Look for the coach buses and long lines to the right when you enter the Visitor Complex.

Blasted by rocket fuel and streaked with space dust, space shuttle Atlantis, the final orbiter among NASA’s fleet, is the most impressive exhibit in the complex. Suspended in a specially designed, $100-million space, it hangs just a few feet out of reach, nose down, payload doors open, as if it’s still orbiting the earth. It’s a creative and dramatic display, preceded by a chest-swelling film that tells the story of the shuttle program from its inception in the 1960s to Atlantis’ final mission in 2011. Around the shuttle, interactive consoles invite visitors to try to land it or dock it at the International Space Station, touchscreens offer details of missions and crews, and there’s a full-size replica of the Hubble Space Telescope and a not-very-scary ‘shuttle launch experience.’ Docents, many of whom worked on the shuttle program, are stationed around the exhibits to answer questions and tell tall space tales.

Heroes & Legends and the U.S. Astronaut Hall of Fame

Next to the Rocket Garden, the newest exhibit at the center celebrates pioneers of NASA’s early space programs, inspiring a new generation to keep their intergalactic dreams alive. It starts with a 360-degree film on the lives of astronauts, then guides visitors through displays of a Redstone rocket, space shuttles and astronauts’ personal belongings, along with stations organized under character traits of astronauts, such as ‘passionate,’ ‘tenacious’ and ‘disciplined.’ The exhibit also features the Mercury Mission Control room and the 4-D movie Through the Eyes of a Hero, about the lives of the 93 Hall of Fame inductees. Finally, inside the recently relocated and revamped U.S. Astronauts Hall of Fame, visitors are welcomed by a statue of Alan Shepard, along with interactive video displays of the astronauts and their missions.

READ  9 Museums for American art in the US

Extended tours offer the opportunity to visit the Cape Canaveral Air Force Station and Mercury and Gemini launch sites. Great for kids, Dine with an Astronaut offers a chance to hang out with a real astronaut, while the Cosmic Quest is an action-oriented game-play experience featuring real NASA missions involving a rocket launch, redirection of an asteroid and building a martian habitat. You can also Fly with an Astronaut and take part in the Astronaut Training Experience (ATX) to experience some of the rigors the astronauts do in preparation for a Mars journey.